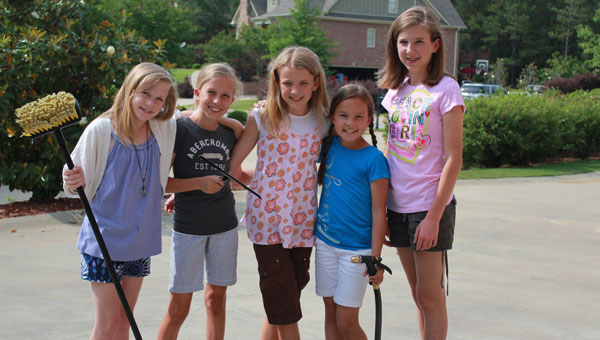 Students at Chelsea schools have been busy working at projects to raise funds for victims of the April tornadoes that swept through our state.

“People lost everything,” said Intermediate School student Emma Harvey. “They were injured and killed. We were so lucky the storms missed us, and we want to help people who were in them.”

Harvey, O’Connell, Harvey’s sister and a friend, made a little over $200.

“I’ve done funraisers before,” Harvey said. “One of my keys to getting money for charities is to not set a price, but let people give donations.”

They take in more money this way, she said.

This group collected $200, plus $200 when Emma Bunyard’s father, as promised, doubled what they made.

Principal Dr. Resia Brooks said the projects were initiated by the girls. “I was very moved by their conscious effort and how intentional they were to help.”

She and School Counselor Cynthia Smith called the girls together for photos and to commend them on their work and caring attitude.

“These girls are little, and people think we can’t make a difference,” O’Neal said. “But we can. Every dollar counts.”

Other fundraising projects at the intermediate school included “Coins that Count” drive where a large jar was filled with coins and bills.

Several large, plastic bins filled with personal hygiene items were presented to Pleasant Grove during a May 20 football game at Chelsea High between Chelsea Hornets and Pleasant Grove Spartans, along with donations from the Chelsea community and game proceeds.

“It’s been exciting.” said fifth-grader O’Neal. “I’m glad we put all our efforts together.”