Helena turns out to help find a cure 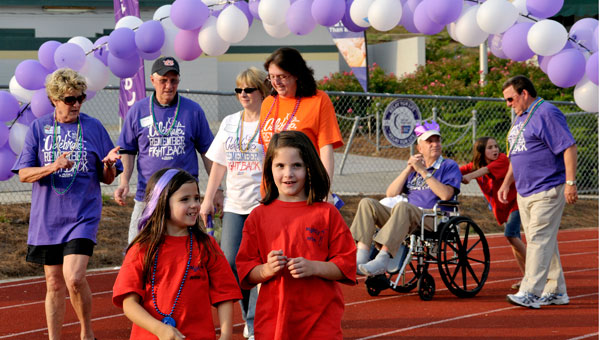 In the foreground as the Survivor’s Lap was under way are Sara Turner, 6, and her cousin, Lauren Danley, 8. Shirley Watters is in center under balloons and Dale Groom is in wheelchair pushed by Elizabeth Turner and conversing with Jim Sides. (Contributed)

Many Helena faces were seen at the North Shelby Relay for Life (NSRFL) held on May 20 and 21, and, of those bedecked for the theme ‘Carnivale To Find a Cure’ in masks and gold, green and purple beads, more than a few were under 18.

“The turnout of young people, from preschool through high school, was unprecedented for this event,” said Bob Van Loan, 2011 event coordinator.

Helena Intermediate School student Riley Montgomery, who recently received the good news that her cancer is in remission, was on hand with her mother, Amy Montgomery, and an enthusiastic team of friends and supporters, Riley’s Love Bugs.

Amy Montgomery spoke movingly to the crowd about Riley’s bout with a cancerous growth on her kidney.

Elizabeth Turner and her cadre of Mighty Mites team were in high profile red shirts throughout the event. Elizabeth, also an HIS student, has been raising funds for Relay for Life since fall of 2010, and also made a presentation to the HIS faculty.

The Mighty Mites consist of Elizabeth and Sara Turner, Sara Peet and Lauren Danley, each of whom has raised more than $500, and Neal Peete, Connor Tiffin, Kathryn Ford, Abby Spicer and Maggie Smartt.

“Elizabeth has such a big heart,” said Carolyn Groom, whose husband, Dale Groom, is a pancreatic cancer survivor. During the Survivor’s Lap, Elizabeth was the one pushing Groom’s wheelchair around the track, and the two have an obvious affection and appreciation for one another.

The Grooms moved from Savannah to the area to be near their daughter after Dale underwent surgery at John Hopkins.

“We are totally blessed,” Groom said, “and we want to give back. Funding research for pancreatic cancer is important because the survival rate is so low.”

Six-year pancreatic cancer survivor Denny LaVercombe said there are few early warning signs. In his case, he turned yellow and experienced itching, which sent him to a doctor for early detection. A survivors group meets locally each month.

“Advocacy Day is June 14, and for anyone wanting more information, our website is Pancan.org,” LaVercombe said.

NSRFL had raised over $76,000 by May 23, according to Bob Van Loan, surpassing the original $50,000 goal. Donations are expected to continue coming in through August.

By dusk, the word HOPE was spelled out with luminaria glowing in the grandstand; it transformed into the word CURE during the hour that the entire track was lined with tributes to loved ones and words of encouragement for those still fighting the fight.

One luminaria dedicated to Janice Yester caught my eye with multiple messages. Above the “every candle has a name” insignia it said, “My darling wife, I miss you and hope you are happy dancing with the angels.”