Our very own Captain Kirk to be deployed 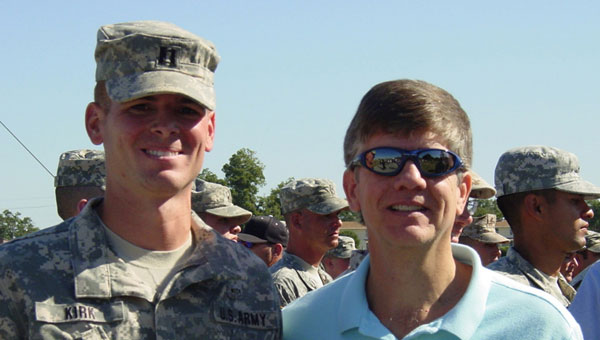 Captain Alan Kirk will be deployed to the Middle East for one year. (Contributed)

The Starship Enterprise had a Captain Kirk and so does Shelby County.

United States Army Captain Alan Kirk will be deployed to the Middle East next month for one year.

Kirk grew up in Shelby County and graduated from Oak Mountain High School in 2002. It was there that he started Youth Legislature and received a college scholarship for doing so. He played in the OMHS band, was a member of the Scholars Bowl team and jazz band.

He later attended Auburn University, where he was also a member of the band and received his bachelor of science in Political Science in 2006. Upon graduation, he received his juris doctorate from Cumberland Law School, where he was elected president of his class.

He is currently assigned to the 108th Air Defense Artillery Brigade at Fort Bragg ,but was previously in the XVIII Airborne Corps there.

He began his Army career at Fort Lee, Va., where he graduated from The Judge Advocate General’s School and Legal Center in Charlottesville, Va. After graduating, he went to Fort Benning, Ga., to the Army’s Direct Commissioning Course then to Fort Bragg, N.C., for his first duty station with XVIII Airborne Corps.

He returned to Fort Benning in 2010 to attend Airborne School. He graduated in October, and is currently on jump status. He maintains his status as a paratrooper at Fort Bragg.

It was there that he became the commander of the tax center, managing a staff of 50 and completing a record number of tax returns – more than 17,000.

Next month he will deploy with the 108th for one year as their Brigade Trial Counsel.

When asked about his name and rank “Captain Kirk,” he says he gets ribbed about once a day from the older soldiers but that many of the younger ones have no idea who Captain Kirk is or what Star Trek is, for that matter.

Kirk is an all-American young man who will be serving our country in the Middle East for the next year. Join me in praying for him, his wife, Melanie, his parents, Rena and Scott Kirk, and their entire families.

While he is only one, he is representative of the courage and excellence of them all.