That is of course unless the horse is the famous Jose Horsey.

Those of you old enough to have been singing along with this tune known to everyone in the early sixties will be thrown off by the omission of Mr. Ed’s name at the end of that jingle.

Not to worry, all will be explained.

Helena now has a personable palomino horse over in a pasture on Roy Drive that is daily increasing his vocabulary thanks to his drive-by fans and those who stop to chew the fat with him. 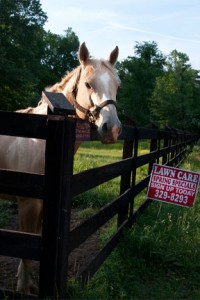 Helen’s Jose Horsey has his own Facebook page. You can reach him at josehorsey@yahoo.com. (Contributed)

I had pulled over myself and taken his photo — for which he posed amiably — a few weeks back because I found the juxtaposition of him and the nearby lawn maintenance sign to be rather funny.

He is most photogenic with the western rays illuminating his coat.

Now, I understand he has been christened Jose Horsey by Senoritas Kim Ford and Shannon Cowart and began his own Facebook page, which has garnered an expanding popularity that bound to spread soon beyond his humble Helena haybales.

More recently, he even got his own vanity car tag for his fence.

Due to an incident where a good Samaritan thought he looked malnourished and offered him a fast food doggie bag, a sign has been posted explicitly asking folks to not feed him. Or in acronym, DNFTFH, which translates as ‘Do Not Feed the Frickin’ Horse.’

Both his owner and the senoritas indulge him with nourishing horsey treats, so he can keep up his strength and stay healthy.

He is ok with apples and carrots, but due to his penchant for nipping — a habit he admits to working on getting under control — this may be an occasional adult-only activity. (He has joined a four-step program for support with this horsey habit.)

In this heat, Jose is keeping more to the shaded back pasture, but still appears down at the fence to nod to passerbys in early morning and evening.

During the school year, there were several children who demanded to be driven by each morning to wave at him.

He has some men-buds who share the racing news with him and take seriously his advice on which horse to bet.

And he inspires people like Karen Hart Valencia who posted, “Drove by yesterday and you were scratching your face on the fence.

Looked like a good idea . . . maybe I’ll try it next time I have an itch in the middle of my back that I can’t reach.”

Jose may also be emailed at josehorsey@yahoo.com.