Lance Corporal James I. Wilson, Jr. has been deployed to both Iraq and Afghanistan.

“I figure if my son can wear these boots for seven months in Afghanistan in 120 degree weather, surely I can wear them for one or two hours to raise money to send care packages,” said Pam Wilson, vice president and co-founder of the Shelby County chapter of Blue Star Mothers of Alabama.

Daniel Robinson was deployed to Baghdad twice. His mother, Bobbi Weidman, president of the organization, said “As I do this walkathon, I’ll be thinking about what he went through and what the other soldiers are enduring now.”

Blue Star Mothers of Alabama Chapter One will hold its first annual “Walk A Mile In Their Boots” walkathon July 9 at Veterans Park in Alabaster. Mothers will be walking in their sons’ or daughters’ combat boots. 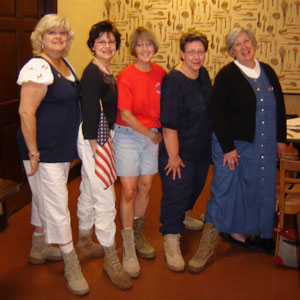 “They do not walk on paved sidewalks in a park, but on dusty roads that could hold a deadly IED,” said Joyce Bulford. “By doing this we are saying ‘We have not forgotten you, we support you, and want to remind others that you are sacrificing your comforts for us and a people we know little about.’”

Bulford’s son Philip is a Marine serving in Afghanistan. Son Donnie is in the Army National Guard Chemical Corp.

Kathyrn Howard’s son, a Marine in Okinawa, Japan, has been away from home for two years. She said the walkathon is “a simple gesture of love and support.”

Katherine Johnston said, “We need to take every opportunity we get to raise awareness of what they do…” She stressed the need for things like socks, sheets and hygiene items. “They need to know they are not taken for granted and forgotten, and they need our prayers daily.”

Funds raised by “Walk A Mile In Their Boots” will help send care packages to military personnel and aid military families affected by the April tornado.

Donation for registration will be $10. Registration begins at 7 a.m. Walk is from 8 a.m. until 10 a.m. Supporters may contribute to a mom who is walking. There will also be a fun run.

Blue Star Mothers meet at Lloyd’s Restaurant on second Thursdays. Military mothers who need support or who want to help our military personnel are urged to attend. Information: Bobbi Weidman 337-1142 or bluestarmotherofal1@live.com

Summer programs under way in Chelsea