Helena man on journey of hope 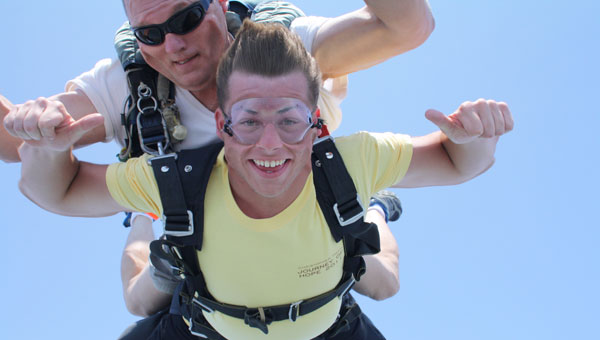 Christopher Hamm wore his Journey of Hope T-shirt when he and his grandmother, Marion Sides, took their tandem sky-diving adventure. (Contributed)

Growing up, Christopher Hamm spent many of his days and nights with grandparents Marion and James Sides.

Finally one night, his parents, Kim and Aaron Hamm, insisted he remain at home. Mid-evening, dragging the phone book alongside, he entered the living room. He needed their help to call a taxi to take him back to his grandparents’ house.

Now Hamm, age 20, before returning to medical school at University of South Alabama in Mobile, is spending his summer cycling across the United States — the route taking him from San Francisco to Washington, D.C.

He joins other Pi Kappa Phi members from 21 different schools for this service project.

His group’s route of some 4,100 miles will be ridden over 67 days with stops in more than 50 towns along the way. At each stop, they will do what is called a Friendship Visit at a facility for the disabled.

Hamm’s family gathered in Mobile to see him off at the beginning of his journey. For the send-off, he wanted to go skydiving in Lumberton, Miss., and there, at the spur of the moment, his grandmother, Marion Sides, decided to also experience tandem soaring.

“I’ve supported him in everything he’s done since he was little,” Sides said. “It seemed natural to be a part of this adventure, too.”

During the 14,500-foot jump, Sides said she felt calm and enjoyed the beauty of the view. During the 65 seconds of the first two-mile free fall, she was looking about for Christopher in his yellow shirt, who jumped first.

For his Eagle Scout project, Hamm installed the flag pavilion at Helena Amphitheater. By age 15, he was interested in cardiothoracic surgery and was mentored by Dr. Sara Terriera at UAB. While still in high school, he sat in on more than 20 heart surgeries.

His mother said his friends call him Christopher Hammfacts in jest about his memory that is akin to a human Google. His compendium of knowledge, especially about animals and fish, makes him an interesting conversationalist. During their ride through the desert, he killed and skinned a rattlesnake and posed for a photo with a dead skunk.

An old knee injury was reactivated on the trip near Park City, Utah. There, he had an MRI and Tiger Woods’ orthopedic specialist pronounced a medial meniscus tear but gave Hamm permission to continue. Hamm received injections, and his tenacity to stay the course has been an inspiration to his teammates.

His family will journey to Washington, D.C., to greet him in August.

For an update on his progress or to donate to PUSH America, see: Christopherhammjoh.blogspot.com.