Tutus for all ages making a huge hit

Picture this scene: New York City, 34th Avenue, just outside Macy’s. A 60-year-old woman and her 80-year-old mother are visiting The Big Apple. Heads are swiveling in their direction as if they are somehow powerfully magnetized.

They are thoroughly enjoying the attention they are getting. Strangers strike up conversations because even though this is NYC, they haven’t lately seen grown women in tutus.

Yes, along with their emblazoned tank tops, the ladies are wearing . . . tutus. The latest in custom tutu wear is made in Alabama by Suzi Tillitski and Joelle Roberto.

At a recent festive fashion show at the Studio Southern, tutus in a variety of colors and themes were modeled by a bevy of young ladies, some demure, others more than jazzed to trip along the confetti-sprinkled runway. 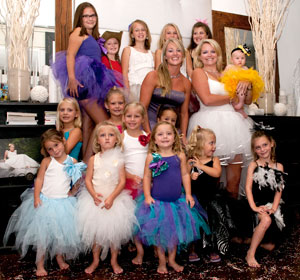 “I turned to my husband right then and said, ‘I am calling them on Monday morning.’ With the attention they are creating, I want their tutus in my store,” Murphy said.

“I could visualize tutus as a fun theme for a bachelorette party or an unusual outfit for a flower girl.”

Murphy has moved her Old Town wedding and event planning services into a larger space at 4079 Helena Road (adjoining LaReunion) and has added upscale women’s and children’s consignment merchandise alongside her wedding gowns, bridesmaid dresses and tuxedo rentals.

Tillitski and Roberto are two local moms, former friends at PHS, who rekindled their friendship after living away from the area, marrying and starting families. Their now-budding business, Don’t Mess With Our Tutus, began as a hobby and a way for them to enjoy girl-time together.

In their introduction at the wine and cheese fashion show party, both thanked Brenda Roberson, Tillitski’s mother for her ideas, inspiration and support.

In the crowd that evening, I was especially impressed with the demeanor of one, Carmen Moseley, in her cowgirl-themed tutu with red-bandana accents — her hair in pigtails and matching leather boots and western hat. She seemed to me to represent the way a fun outfit can allow the wearer to take on added persona and attitude.

For more information, call Tracy at 358-3332 or see: facebook.com/studiosouthern

Helena man on journey of hope

Christopher Hamm wore his Journey of Hope T-shirt when he and his grandmother, Marion Sides, took their tandem sky-diving adventure.... read more