“For me, and for the pros I work with, coaching goes beyond the sport. We’re teaching the kids the rules of tennis, but many of these rules are good rules for life,” said Rusty Wilkes, founder of Rusty’s Tennis Academy at the Pelham Racquet Club.

Wilkes had a captive audience recently, as Pelham’s junior tennis teams gathered for his tournament kick-off meeting at the USTA State Junior Tennis Tournament in Auburn. Junior players compete on teams ranging from age 12 and under through 18 and under. Competing in USTA league play throughout the year qualifies the players to compete at state.

Many of Rusty’s Tennis Academy players are returning players, and multiple siblings from families are often playing in the state tournament. State becomes a yearly pilgrimage for these families, and Wilkes’ Friday- night meeting to focus the kids for the weekend becomes a celebration — before the competition even begins. At the Friday gathering, Wilkes awards trophies for most improved and most inspirational to kids whose effort and attitude have impressed him. 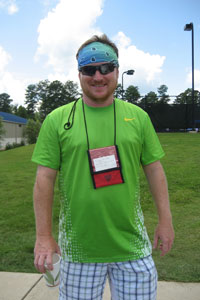 Rusty Wilkes, founder of Rusty’s Tennis Academy at the Pelham Racquet Club, works with kids of all ages to improve their tennis games and teach them life lessons. (Special/Connie Nolen)

A man who admits that “none of the junior competition we’re involved in could happen without parent volunteers,” Wilkes also recognizes parent coach volunteers with trophies. Wilkes doesn’t realize the testimony his awards reveal. Parents receive Volunteer Coach of the Decade awards. Wilkes’ energy and passion for the sport of tennis and the kids who play keep both parents and kids engaged and enthusiastic.

Wilkes said, “Although Rusty’s Tennis Academy has my name on it, the other pros who are involved, Omar Alcaino and Clay Parrish, are great to work with, and all of us really enjoy teaching these kids — and watching them grow.”

Wilkes is a great communicator. A man who shares tennis information and his feelings, Wilkes’ coaching style, meetings and all-inclusive emails make him more than a coach to his tennis families.

Wilkes admitted that his wife, Franchesca, deserves a trophy for supporting him in his 24/7 tennis lifestyle. Wilkes said, “Before I met and married Franchesca, my PRC kids were my kids. Now, I have my stepkids Emily and Alex and I know how blessed I am.”

Rusty wraps up his Friday night meeting/season celebration with these words, “Remember, we’re all blessed. We want to go out there and win. Even if we don’t win, we’re OK as long as everyone gives their best.”

With that wisdom, we’re all winners.