Planning for change at PHS 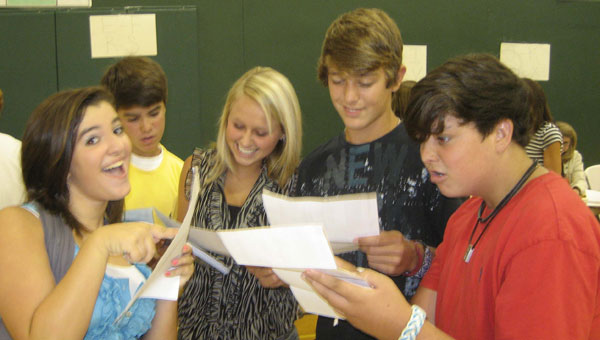 As preparations take shape for the new school year, Pelham High School’s one certainty is change. Enlarging the cafeteria and adding classrooms, including some exciting additions to art classes, will bring more opportunities and space for our students.

Since construction continues until October, administrators have plans for opening school that work around PHS progress-in-action. In the meantime, we’re under construction. That’s the theme that PHS teacher Rebecca Burnett used for this year’s Camp Pelham for the incoming freshmen class of 2015, who come together for the first time during this academic year.

At PHS summer registration, incoming freshman Emma Manus said, “The class of 2015 is the first class to go all of the way through Helena Middle School.”

Manus’s comment brings to mind another change looming for Pelham High School that involves construction that is both figuratively and literally down the road — a new high school in Helena. Which class will be the last united class of Helena and Pelham kids to graduate from PHS?

Pondering the looming reality of a new high school in Helena, I feel like I do about sending kids off to college. Before kids leave for college, we’re excited for them. We know they’re ready for a new place; however, we’re also sad because separation changes things.

Looking at the long registration lines and anticipating this year’s crowded hallways, I realize that the time for independent high schools is approaching. The predicted timing of opening a new high school in Helena in the fall of 2013 or 2014 should prove advantageous for both communities. If current growth trends continue, both communities will readily maintain high schools that support large faculties, plenty of electives, competitive sports and Advanced Placement courses.

In the meantime, let’s anticipate how wonderful our completed new additions at PHS will be — and join with both the Helena and Pelham communities to work toward making this year an amazing year of celebration and unity at Pelham High School.

By CONNIE NOLEN / Community Columnist “For me, and for the pros I work with, coaching goes beyond the sport.... read more