Nearly 65 years ago, William Ramsey’s mother was left to raise her 7-year-old son alone. Because of her job, she sent him to live with his aunt Cennie Ward in Alabaster.

At different times in his life, Ramsey has been employed by the Curb Market, Cheney Cement and Lime, Combustion Engineers, Cahaba Materials, Shelby Baptist Medical Center and the Siluria Textile Mill. 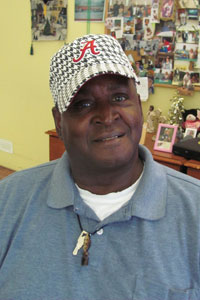 William Ramsey, a resident at Alabaster’s Shelby Ridge and Rehab Select, has been making great strides since he arrived at the nursing home. (Special/Sandra Thames)

A longtime member and deacon at Faith Temple and Deliverance, Ramsey’s world changed drastically when his beloved Flora was diagnosed with breast cancer and later succumbed to lung cancer. During her last several months in the hospital, Ramsey was with her every available moment.

Immediately after Flora’s death and 44 years of marriage, Ramsey was suffering in a state of extreme depression and anxiety. Within three months, Ramsey said, “My whole body just fell apart — bladder, colon, nerves, everything. I was unable to do anything for myself.” His children offered him a home, but he said, “They had their own lives and families and I didn’t want to be a burden.” Ramsey chose the nursing home route. His home was foreclosed, car sold, assets forfeited and William Ramsey, who always took care of himself, was seemingly at the mercy of his surroundings.

One day, his certified nursing assistant came in and told him that his life was not over, that he had to learn to live again. The first time Ramsey tried to feed himself (he has badly crippled hands) he said, “I chased them green peas around my plate for 10 minutes before I thought about using my other hand as a pusher like children do.”

On a Sunday morning not long after that, he decided he would get out of bed and try to stand. This was the beginning of the rehabilitation of William Ramsey. To the amazement of many people, Ramsey is now able to feed, bathe and dress himself. His smile is contagious, his eyes sparkle and he can name every person in every picture in his room — and there are dozens.

Ramsey is fun-loving, dedicated and obviously popular, as several visitors dropped by his room to say hello while I was there.

Ramsey is a big Alabama fan and enjoys watching the Tide on television in the fall.

He takes part in many of the activities offered at Shelby Ridge — church services, crafts, bingo, music therapy, visiting speakers, etc. Ramsey is a man who recognizes the blessings of his past, overcame adversity and faces his future with faith and kind words.

“God brought me back,” he said.

By SANDRA THAMES / Community Columnist The original “Sweets and Songs” came into being as part of a church -wide... read more