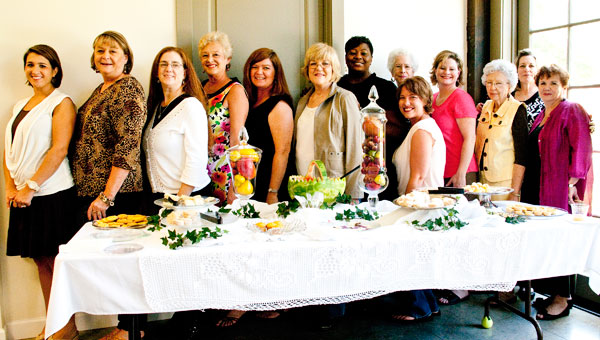 The recently held second annual Fashion Extravaganza and Tea at Grace Christian Church included the addition of children’s fashions modeled by a host of delightful youngsters.

Adult fall styles from Christopher and Banks were presented by Sonja Farrington, and Deann Scholl presented children’s fashions from Castles and Crowns.

The tea in the fellowship hall was a luscious spread of sandwiches, fruits and sweets. The men of Grace Christian manning the punchbowl and taking care of cleanup included Pastor Tommy Morgan, Steve Hogue, Scott Blake, John Sowell and Fred Blake.

On another topic, I would like to share a story of struggle that has a happy ending. Out of respect for all involved, some names will remain anonymous.

In mid-May, a Helena resident became concerned for an elderly neighbor who had apparently had his water turned off.

The neighbor knew he lived alone and thought he might need help paying his bill. When kindly citizens became involved, it became apparent that this gentleman, a World War II veteran, was no longer able to attend to his own needs.

Although his home was neat and tidy and he sat on his porch each evening, well-dressed and greeting neighbors, he had been living without water service since December 2010, and without electricity or gas for several weeks. His telephone had long been cut off. He informed those who began asking questions that he “no longer received any bills,” while, in fact, his home mortgage was so far in arrears, foreclosure proceedings were under way. His son and daughter in Ohio both have their own major health issues, and family relationships had become strained over the past several years.

Citizens acting on his behalf first formed a meal brigade so that he would have daily hot meals and filled his shopping list.

He was driven to Alabama Power and the gas company to reinstate his utilities and also to get a check up from his doctor who diagnosed dementia. A caring citizen then helped him apply for veterans’ benefits and coordinated with his daughter, who was unable to travel, arrangements to get the gentleman into an assisted living facility near his children.

Mayor Penhale also checked on the gentleman over the two-month period while moving logistics were arranged. Det. Sgt. Chris Rollan was instrumental in the transport arrangements and his packed possessions were loaded by Helena Police Explorers.

This little known example of community kindnesses has resulted in the gentleman being safely relocated and reunited with his family, including a 13-year old grandson, who shares his grandfather’s interest in model trains.

Be thankful for each day, 100-year-old advises