There’s a reason they call him “Big Luther.”

At 6-foot-9”, he towers above most people he meets. His height was the brunt of many jokes at the CASA Roast held last week at the Wynfrey Hotel.

Approximately 150 people joined together in laughing with (and at times) at the attorney general.

He received lots of ribbing from his high school basketball opponent and friend, Hatton Smith.

Smith said that all during his campaign, Luther Strange denied the fact that he lived in Mountain Brook,  so Smith awarded Strange with a Mountain Brook Club towel, flag and golf hat. He went a step further in saying that Luther would not be where his is today if he wasn’t average size and wasn’t “big.” 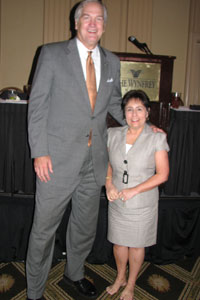 Jeffrey Breit, an attorney from Virginia, first met Strange in college at Tulane University where they both played basketball. With Breit being approximately 5-8, they were known on campus and Mutt and Jeff. Breit poked fun at Strange for being involved in politics and for pretending to be so non-political.

Strange is an Eagle Scout, and he indeed lives like one.

He works hard, strives to do what is right and respects others.

The joke was made that he was really far too nice to be roasted.

While the roast was fun, it wasn’t nearly as hot or feisty as it has been in the past.  Since the attorney general is the state’s top law enforcement official, I guess that’s a good thing.

The comment was made that most states’ top law enforcement official can shoot guns, but all ours can shoot is a basketball.

The crowd roared with laughter at the unique perspectives each of the characters had and the advice they gave Strange.

This year’s roast produced $35,000. Proceeds from the annual roast and silent auction go to the Court Appointed Special Advocates (CASA) of Shelby County.

CASA is a non-profit organization that recruits and trains volunteers to go through the court process with abused and neglected children.

CASA’s goal is to prevent child abuse and to ensure that every child has a safe and permanent home.