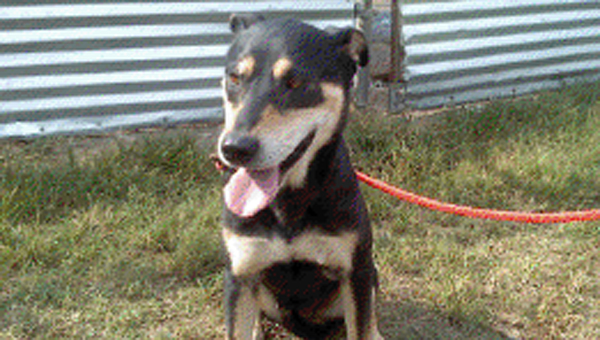 Dolly Dog sits with a leash on after being captured Sept. 9. (Contributed)

CALERA – After years on the lam, Dolly Dog has been captured.

Calera animal control officer Chris Smith nabbed Dolly Sept. 9 near the intersection of U.S. 31 and Alabama 25, miles away from her usual stomping ground.

A tan, mixed-breed female, Dolly is best known for wandering alone the last three years around the Waterford subdivision and Kensington Manor apartments. Drivers who traveled along Alabama 70 may have seen her walking or running alongside the road.

“It felt good to be able to get her off the street and get her to a good home,” Smith said.

Dolly is being treated for a variety of ailments at Calera Animal Hospital, according to Buddy and Carla Smith (no relation to Chris Smith). Dolly is malnourished, riddled with heartworms, hookworms, tapeworms and fleas, according to the Smiths, who plan to welcome Dolly into their home upon her release.

Buddy and Carla Smith, with help from Chris Smith, tried to capture Dolly Feb. 23 by putting a sedative in a sausage biscuit. That scheme was foiled when a neighbor, unaware a rescue was in progress, approached and spooked Dolly, causing her to run away.

Since then, Buddy and Carla Smith said they’ve uncovered more information about Dolly’s past – and why she until recently never left the Waterford area.

According to the Smiths, Dolly’s previous owners had a home in the Waterford subdivision. When the home was foreclosed, the owners moved but left Dolly behind.

“A neighbor said that for three years she came back every week to the yard where she had been left,” Carla Smith said. “She just knew in her heart they would return for her.”

The owners never did, and in recent weeks Dolly – possibly following railroad tracks – left the Waterford area and ended up in downtown Calera.

Chris Smith spotted her Sept. 9 in the CVS parking lot at U.S. 31 and Alabama 25. He shot her with a tranquilizer gun. Dolly stumbled for several blocks before finally being captured.

“We will never leave her,” Carla Smith said. “She is family.”

By BRAD GASKINS / Staff Writer COLUMBIANA – A police officer and his cadaver dog trained by a nonprofit organization... read more