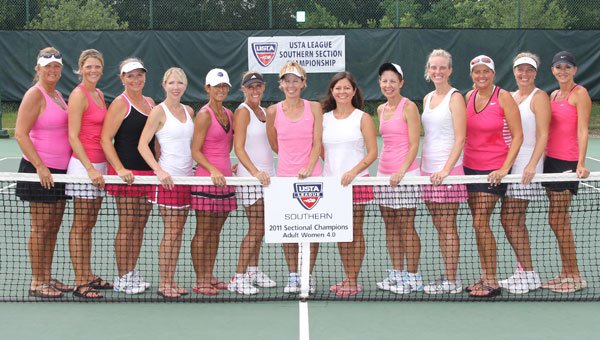 The Pelham Racquet Club 4.0 women's tennis team will compete in the national tournament in Tucson, Ariz. from Sept. 23-25. The Pelham men's 2.5 and 3.0 teams are also competing in their national championship tournaments. (Contributed)

On Sept. 23, three groups of athletes from the Pelham Racquet Club and Tennis Center will mark a milestone no other facility in the country has matched.

“This is a first. It’s history in the making,” said Pelham Parks and Recreation Director Billy Crandall. “Our facility is sending three teams to the national championships. That has never happened before in the U.S. Tennis Association.”

Members of the Pelham men’s 2.5-level team departed for their national championship tournament in Palm Springs, Calif., on Sept. 20, and will compete in the tournament from Sept. 23-25.

Crandall, who is a member of the 2.5 team, was preparing to board a plane with the other members of his team on the afternoon of Sept. 20, and said he was surprised at how quickly the team has progressed in competitions over the past year.

“We just started playing together last August, so it’s been a little over a year now,” Crandall said, noting the team would have “gotten nowhere without (team) coach Omar (Alcaino).”

“I think that says a lot about the strength of tennis in Pelham,” Crandall added.

Crandall said it is customary at the national championship tournament for teams to present their competition with gifts before the matches. On Sept. 20, Crandall said he had a “suitcase full of Rick and Bubba beef jerky and Alabama state pins” to gift to opposing teams.

Before making it to the national championships, the three teams had strong showings in the state and sectional tournaments. The women’s 4.0 team, the men’s 3.0 team and the men’s 2.5 team won their sectional divisions, defeating teams from Covington, La., Lake Charles, La., and Lawrenceville, Ga., respectively.

“Pelham is definitely a name that is well known,” Mills said. “Our facility is really getting out there.”

“Everybody else hates us because we always do so well,” Crandall said with a laugh.

Crandall said the teams’ trips to the national championships could help draw more people to the Pelham facilities.

“I don’t think people realize the impact this will have in Pelham,” he said. “I think a lot more people will start coming up there because of this.”

Dolly Dog sits with a leash on after being captured Sept. 9. (Contributed) By BRAD GASKINS / Staff Writer CALERA... read more