Panthers get big win at home 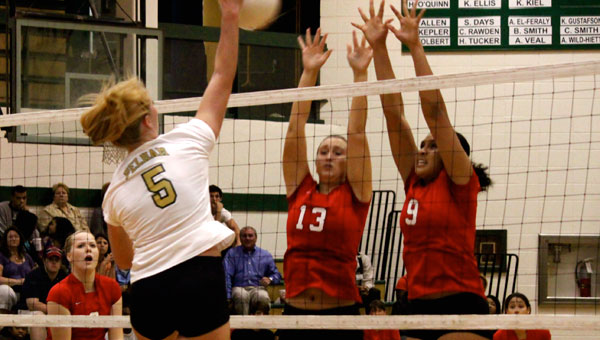 “I liked that it was a team win,” Pelham head coach Haven O’Quinn said. “I got to get everyone in, and I liked that we had enough confidence and we didn’t shake and rattle too much once we had everybody on the court.”

Thompson (11-6, 0-4) took a quick six-point lead to start a first set that was marked offensively by hard hitting and aggressive net play, but the lead didn’t last long. The Panthers (23-12, 3-1) rallied from behind and closed the set on a kill from Porsha Tolbert.

“We practiced a lot on hitting spots,” said Tolbert, who had 10 kills and eight digs in the match. “When we play a game, that comes into play. That’s what we’ve learned to do.”

The intensity at the net didn’t die down during the second set as the hard hitting and dominant blocking left little room for error. The Panthers surged ahead following a block and kill from setter Sydney Days, who totaled 30 assists on the night, and the victory was capped thanks to kills from Alison El-Feraly and Ashley Kate Kepler.

Despite being down two sets, as the third match was under way, it was clear the Warriors weren’t going down without a fight.

“This last game, I was a little disappointed in how we started out,” Thompson head coach Kellyanne Turnbow said, “but the girls came in and did a really good job of trying to fight back and get the win.”

Late in the game, Thompson scored five unanswered points and came within four points of Pelham, but the Panthers weren’t about to let their early lead slip away, as Emily Jackson set up the final kill by Caitland Smith to take the match.

Despite sweeping the Warriors, Pelham players and coaches said it wasn’t their most impressive performance.

“Overall, it was not our strongest match,” O’Quinn said. “When you can still win 3-0 and know you didn’t play your best, it’s kind of a good thing.”