“We were talking after a summer workout,” said Pelham High School head wrestling coach Eric Pollard. “We needed to improve our storage area. The place where we keep all of our wrestling gear is small and we needed some shelving.”

As Pollard and assistant wrestling coach Chris Pike discussed how much material for basic shelving might cost, one of the parents offered to check around to see if we could get the materials donated.

Ramon Gonzales, a 1980 PHS graduate and a Pro Desk associate at Home Depot, was the person who received the donation request. He asked his Pro Desk supervisor, Adrianne Chesnutt, about making the high school’s request into a Team Depot Project.

Once the project was approved, James Davis designed the space. Gonzales said, “Six of us, including class of ‘82 PHS grad Elizabeth Dolbow, went in and built the space out in one 8 a.m. to 5 p.m. workday with Chesnutt as our team captain.” 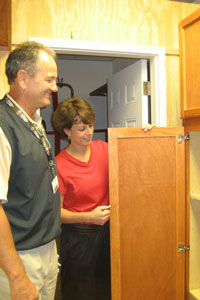 Gonzales said Team Depot takes on many community service projects and that they’ve worked on outdoor classrooms and playgrounds in the area.

“Building at Pelham High School seemed like exactly the sort of project Pelham’s Home Depot should be a part of,” said Gonzales.

Coach Pollard said his biggest job was getting the paperwork done. A local application for the grant had to be completed on paper. Once that application was accepted, online applications were necessary for the national office. Asked if all the paperwork was worth the trouble, Pollard answered, “Absolutely! The Home Depot crew did such a great job. We have solid oak shelving bolted securely to the wall. We would have been lucky to throw together some plywood shelving on our own.”

Not only did the build include shelving, the crew also created a custom desk and installed a separation wall and cabinetry.

According to Pollard, the amount of Home Depot’s materials donation was $1,900.

“What you really can’t factor is the cost of the expertise and workmanship of the Team Depot crew who came to do this for us. Their time was a huge gift,” he said.

“Giving back to Pelham High School by being part of this build was especially fun for the two of us that are PHS graduates,” Gonzales said. “We were happy to be a part of this Team Depot project.”

Choosing a theme for life