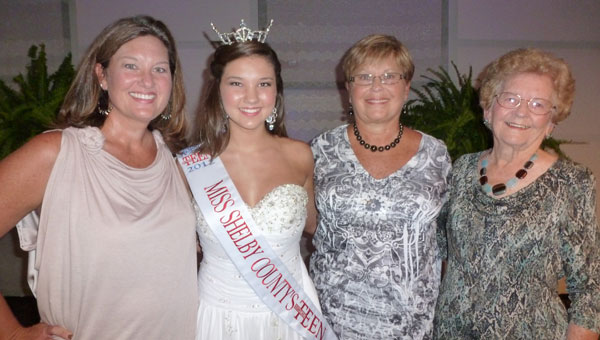 The Miss America Organization (MAO) is the largest provider of scholarships for women in the world — more than $45 million dollars since its inception 90 years ago. The crowns that are won at the local, state and national level are awarded on personal interview, talent, lifestyle and fitness, evening wear and on-stage questions to women ages 18-24.

In 2005, a new scholarship program for girls ages 13-17 was introduced by the MAO, the Miss America Outstanding Teen program, which competes also at the local, state and national levels. More than $2 million in scholarship money has been awarded since the new program began.

McDougal is 15 and a sophomore at Oak Mountain High School. She is the daughter of Wendy and Tom McDougal (Indian Springs); and her mother was Miss Alabama 1991. Her brother, Madden, is a sixth grader at Oak Mountain Middle School. Her grandparents are Chelsea City Councilman Dale and Mary Neuendorf and Julie McDougal of Montgomery, and her great-grandmother is Danolyn Poole (Greenville). She is a cheerleader, member of the show choir “Chanter,” drama and French clubs and a Diamond Doll (baseball team hostess).

MacDougal is passionate about her platform, “PETS — Providing Encouraging Training Smiles for the pet and owner.” She recently raised $300 for the Shelby County Humane Society by hosting a princess party where young girls paid $10 for a day of fun, fixing hair, makeup and manicures as McDougal talked to the girls about the responsibilities of pet ownership. McDougal has already appeared at the South Shelby Chamber American Idol party and introduced “Elvis” at the Shelby County Fair. She looks forward to riding in the Columbiana Christmas Parade and appearing at other events.

For her onstage question, McDougal was asked what she has gained by participating in the Miss Outstanding Teen program.

“I have gained so much more self confidence,” McDougal replied. “I have always been painfully shy, and this has helped me step out of my comfort zone.”

“It means the world to me to represent my county. It is such an honor,” said McDougal the night she won her crown.

Shelby County is honored to have Mary Ann McDougal as its Miss Outstanding Teen 2012.