Let’s honor those who keep us safe 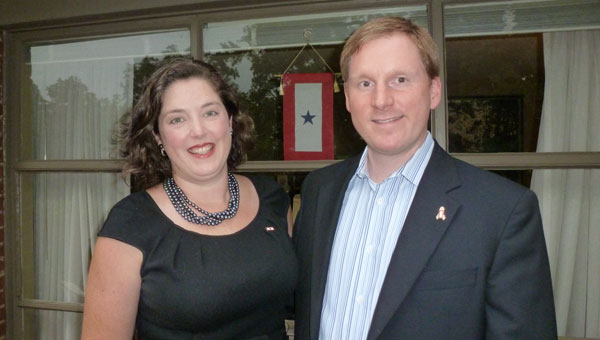 Katherine and Robert Robinson with a Blue Star Flag in a window at their home for Katherine’s brother serving in Afghanistan. (Contributed)

There is a blue star flag in my window. The blue star also hangs in my son Robert and daughter-in-law Katherine’s window; their sister-in-law’s window; in Katherine’s parents and four brothers’ windows.

The blue star flag, which represents that a loved one is serving in combat, will remain in our windows until Katherine’s brother, Drew, comes home from Afghanistan.

Drew is a sergeant in the National Guard’s 20th Special Forces and is serving his second tour in Afghanistan.

His tours have made our family much more aware of the sacrifices of all those who serve our country. A large segment of our nation spend each day — by choice — to protect our cities, our states and our country from crime, fire and enemies who desire to destroy the American way of life.

As I watched the services on the anniversary of 9/11, I remembered that day 10 years ago. I had just arrived at my office in Fairfield. I went inside and turned on the television and watched in horror as America was under attack.

In 2001, our son Donald was a member of a volunteer fire department in Virginia that had received orders to go help at the Pentagon crash.

My husband and I, for the first time, experienced the fear of a loved one going into harm’s way.

Our son’s unit ultimately did not go, but I will never forget that day and clawing fear.

It has been on my heart to write about the men and women who serve our nation to protect us and to keep us safe, not because they have to, but because they choose to.

These men and the thousands they represent choose to work each day to keep our communities and country safe.

May we remember and thank them every day for their service, and may God bless them all.