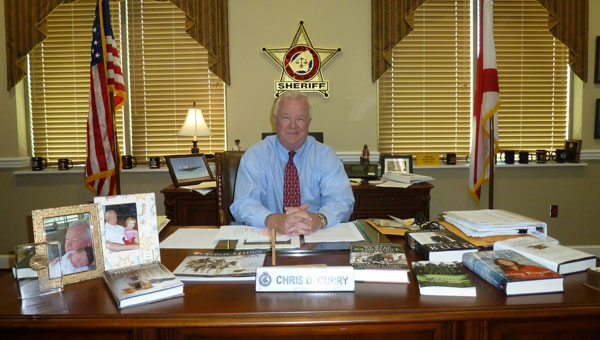 Fate and genes seem to have destined Curry’s rise to sheriff, for he went to Memphis State for a degree in business. Curry grew up in Tennessee — in Shelby County, Tennessee — and his Swedish great uncle, J.F. Shoblom, was sheriff of Missoula, Mont.

Curry’s business brought him to Birmingham where he settled his family in their Shelby County home in 1973. A major turning point in his life occurred in 1979 when Curry came to Shelby County to obtain a pistol permit for safety reasons for his traveling job. As fate would have it, and maybe those Swedish genes leading him, Curry saw a sign that volunteer deputies were needed. Curry signed up and, on Jan. 8, 1980, received his reserve deputy ID card.

For the next 10 years, Curry served as a reserve and developed a passion for law enforcement. His volunteer work fulfilled a need to serve his community, to make a difference. In 1990, Sheriff Glasgow hired Curry as a deputy sheriff. His successor, Sheriff Jones, chose Curry to be the first department operations manager, a position he served from 1990-2000. In 2001, Jones promoted Curry to chief deputy, and Curry was elected sheriff in 2003 after Jones’ retirement.

In the last seven years, the sheriff’s department has served our county of 200,000 residents well. Today, Curry leads 211 employees: 121 full-time deputies and 16 reserves; 122 with college degrees; 15 holding master’s degrees; and two with law degrees. Continuing the vision of Jones with the assistance of Chief Deputy Tom Smitherman, Curry has continued intense career development that has resulted in high quality employees. Shelby County should be very proud of the jail correction officer program, where one can achieve the rank of sergeant and soon lieutenant in the corrections department. Shelby County’s new debt free jail was completed in 2004.

Curry more than anything wants to preserve Shelby County’s quality of life as it pertains to our safety and happiness. He firmly believes in giving someone a second chance in life. Curry is a man of integrity and honesty whose focus in life is to serve and give back as he supports many charities for seniors, children and special needs.

“To preserve a life and to preserve a way of life,” said Curry. “This is my duty and responsibility.”

Let’s honor those who keep us safe

Katherine and Robert Robinson with a Blue Star Flag in a window at their home for Katherine’s brother serving in... read more