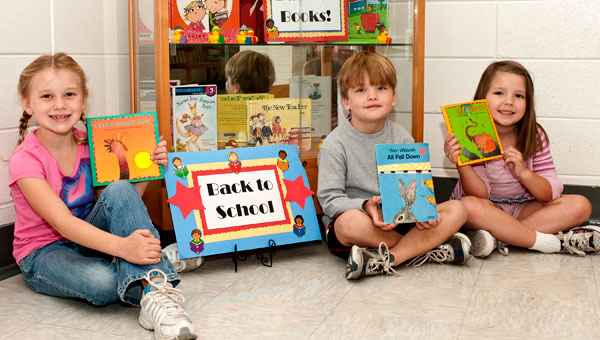 Back to School and Back to Books is a really cool thing say, from left, Ellie Crawford, Gabe Murphy and Molly Waldron. (Contributed)

Now that students have been back in the classroom for some nine weeks, it seemed time to check in with some of our younger minds and find out just how it’s going. I spoke with kindergartner Gabe Murphy, first grader Molly Waldron and second grader Ellie Crawford.

“We do lots of creative things, and learning is cool,” said Ellie. Ellie, who is in Mrs. Debbie Patterson’s room, likes reading and math and says second grade is “a lot more work.” Ellie welcomes the challenge. “I like information, and I like learning about things that are real,” Ellie said.

Ellie likes Junie B. Jones chapter books. “If I come to a word I don’t know, I sound it out,” she said. One new word she has recently learned is bauble.

Ellie has a cat named Lucy Lu, and she liked swimming in pools and her visit to the Tennessee Aquarium this past summer.

Molly Waldron said first grade does require more work than kindergarten, but, “my teacher, Mrs. (Misty) Floyd, keeps saying ‘wait until you get into second grade!’”

Molly prefers non-fiction books about animals and recently enjoyed a book about dolphins. Molly’s class is learning to tell time, but she says telling the long hand from the short hand isn’t always easy.

The children all agreed that their teachers really care about them, and they show that every day. They all voiced that they love school.

Each classroom has a daily writing workshop hour. The Process Conference Approach to writing allows students to pick their topic and learn grammar and spelling as they write about what they know best.

Molly said she writes about her mom and dad and how funny they are. Molly likes it when her mother, teacher Heather Waldron, plays her kindergarten songs in the car.

Gabe Murphy said he likes to write in his book (journal) each day, and since he is getting to know his classmates, he often writes about them. He said he has improved in math. Kindergarten math focuses on counting, sorting, comparing numbers and shapes.

Gabe has a dog named Levi, and on weekends, he likes taking trips with his family.

When asked the most important thing they have learned thus far, Ellie said she is better at telling time as she “totally did not get it in first grade.”

Gabe said the most important thing he has learned is how to write words, and the first words he wrote were ‘I see’ after Mrs. Waldron read them Brown Bear, Brown Bear.

And from Ellie, an impromptu closing  poem:

“I think school is so cool,

Some people say that school rules!”

By LAURA BROOKHART / Community Columnist While visiting the Helena History Museum, Linda Wurstner, who has lived in Helena with... read more