Martial arts tournament to be held in Helena 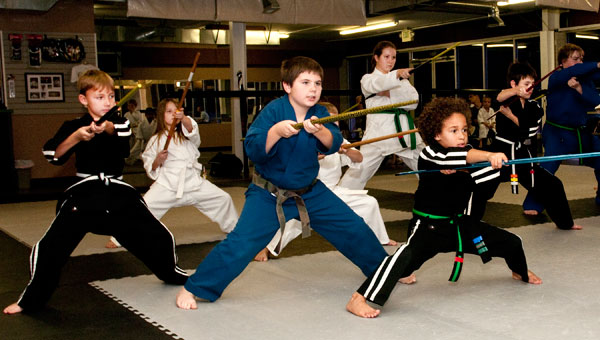 The annual Central Alabama Martial Arts Tournament will be held Saturday, Nov. 19, at the new Helena Sports Complex and will feature statewide competitors as well a cadre of dedicated Helena and Shelby County participants.

Spectators can expect to witness top competition in open and traditional forms, weapons, sparring, and board breaking — just as you may have seen on television.

“Our students have been working hard to be able to compete and put on a outstanding display of martial arts for the Helena community,” said Sean Gilham, instructor at Karen Mitchell’s Impact Martial Arts.

Also during the tournament the demonstration team of Impact Martial Arts, which has been practicing for weeks, will perform all of the competition techniques, for those unfamiliar with the sport.

Erin Trapolino, owner and instructor at Old Towne Music, will perform the national anthem at the competition.

Five dedicated young ninjas from Helena — Saxton Nagy, 8; Christian Tsimpides, 11; Kylie Pritchard; Jabez Kirksey, 10; and Nicholas Martinez, 11 — were all trophy winners when they attended the 2010 IKC Challenge in Columbus, Ga., and are excited to show off skills they have further honed to their own community.

Nicholas Martinez has earned his first class black belt since he brought home the first ever weapons trophy for Impact Martial Arts at that same tournament.

Nicholas, Thea Gilbert said her son has high-functioning autism with an amazing memory and recall for form and moves.

“When he uses the bo-staff (to block and counter an attack) it’s as if it becomes an extension of himself.”

Martinez performs well under pressure and is an inspiration for every child here, Dayna Lindsey, program director, said.

“Wrist action is everything when you are using the bo-staff,” Karen Mitchell tells the class assembled. “Pretend you have water on top of your staff; bring it down, bring it down. Place your hand below the center of the stick, pass it around behind your neck .”

Kelly Nagy, lead singer for the band U.S. and Helena resident, began TaeKwanDo classes himself after watching his son Saxton, who began classes at age 5, quickly demonstrate a high degree of confidence and expertise.

Nagy is a big supporter of the sport and of Karen Mitchell and her staff’s ability to encourage and work with students of all levels.

“TaeKwanDo teaches a child basic values, such as courtesy and self-esteem, that stand them well in all areas of their lives, Nagy said.

“It also enhances their ability to be focused and disciplined.”

Back to School and Back to Books is a really cool thing say, from left, Ellie Crawford, Gabe Murphy and... read more