Shelby County has its own Sweet Potato Queens

However, Shelby County now has its own Sweet Potato Queens. Charlon Couch and Tina Turner Johnson organized the Sweet Potato Queens of Shelby County Dazzling Diva Chapter to have fun and to invest time in the lives of those around them. Couch said, “If it’s not fun we’re not doing it. It’s living life — each day to its fullest,” those are their only two rules. “We invest ourselves in the lives of those around us making a difference one laugh and one life at a time.”

The two women were best friends at Shelby County High School years ago and have always brought out the best in each other.

On a beach trip, they started reading the Sweet Potato Queen books and decided they just had to use the concept of having fun to escape the struggles and pressures of life and to help others do the same.

So they found some outrageous costumes and went to work. 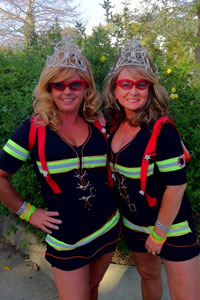 The Queens attended the BCS Championship Game last year coining themselves as “Cam’s Queens.” They were approached in a restaurant by the game’s event coordinator and asked to participate in the pre-game festivities.

“Here we were simple Shelby County Queens on the field at the National Championship Game, on ESPN and so much more,” said Couch. Since that time, they have created many charity events including “Prom Pals” at SCHS in which they helped special needs kids have a total prom experience with tuxedos, dresses and a limousine.

They also sponsored the Ms. Columbiana Health and Rehab Pageant in May.

They crowned a 102-year-old woman with the title. Their next event will be the Great Tater Charity Dance and Costume Party Oct. 29 at Dr. Stancil Handley’s barn featuring music by “Days to Come Band.”

Admission is a packaged toy to be given to local fire departments for local families at Christmas. Toys left over will go to Children’s Hospital’s Sugar Plum Shop.

The Queens are also participating in a trick-or-treat event at Children’s Hospital and the Monster Walk in Columbiana.