Men with a message 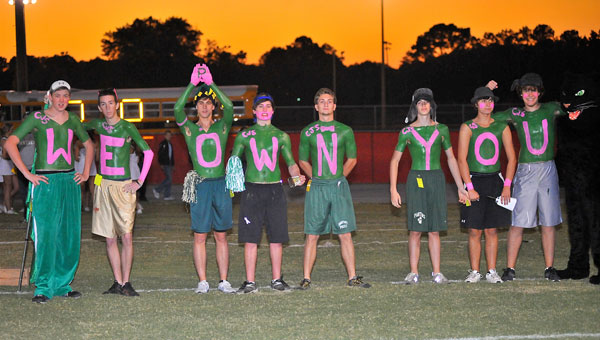 “These are my rules,” Pelham High School math teacher Jean Coker said. Placing her rules before the boys who were asking her to be the first official PHS lettermen sponsor, Coker spoke seriously. “If you can’t abide by these rules, please leave now.”

During Coker’s fifth year as PHS lettermen sponsor, she remembers those early days. Before Coker agreed to sponsor the lettermen, the boys who donned body paint had not been officially sanctioned. Having no official faculty representative to supervise, the unofficial group had constantly changing members who sometimes ran into trouble.

Members of the class of 2008 approached PHS Principal Bob Lavett during the spring of their junior year seeking to “create a different breed of lettermen.” Lavett advised them to find a faculty sponsor.

Coker’s rules for the lettermen insure that youthful humor doesn’t go too far. Only senior boys who apply during the spring of their junior year may be PHS lettermen. A 2.5 or higher GPA is required. However, the group’s membership has included several valedictorians, salutatorians and honor graduates.

Lettermen sign contracts agreeing to abide by Coker’s rules and attend weekly meetings during football season to create plans for generating school spirit. Lettermen sport letters on their front sides. On their backs, their messages include word play and humor. Coker requires the Lettermen to turn in their planned “back sayings” for approval by Thursday. True to their names, the Lettermen are allowed to sport no drawings or pictures on their bodies only words.

The image of lettermen has changed immensely since they became officially recognized.

At football games, the PHS lettermen have collected more than $5,000 for breast cancer awareness. Lettermen purchase their own body paint.

“They are role models. Little kids look up to them and they want to be one of the PHS lettermen,” Coker said.

Recognized on senior night as a pivotal part of the PHS spirit team, the PHS lettermen have sideline passes and they celebrate wins with the team and cheerleaders with the zeal that only a young man who is willing to paint his body in the name of school spirit can muster.

Heart on our sleeves