Mary Sue McClurkin wore pink when we had lunch together last week. It was in honor of October being National Breast Cancer Awareness Month. Her interest in this month’s awareness originated with a self-exam in May of 2002.

McClurkin, a mother, wife, grandmother and elected official, can be described by two other words — cancer survivor.

A true believer in early detection and treatment, McClurkin had extensive chemotherapy that saved her life in more ways than one.

During chemotherapy, doctors discovered thyroid cancer of which she had no symptoms and removed her thyroid. Later, they discovered heart damage from the chemotherapy and gave her a pacemaker. 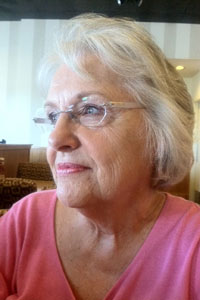 Pacemaker batteries usually last five years. Not hers. Her husband jokingly told her, “You do everything in a very dramatic way.” Dramatic or not, she survived it all, got new batteries for her pacemaker, and all was well.

While we were talking, I noticed her beautiful wedding ring — one large solitaire in the middle with slightly smaller ones on each side. Her husband of 40 years, Van, gave it to her with an appropriate explanation. The large diamond in the middle is representative of their 25th wedding anniversary. The diamond on the left is “for living” and the one on the right is for “not dying.”

What a profound statement for someone who says, “I think I know what it really feels like to die.”

While she may know that feeling, she also knows the feeling of surviving, and her husband, three sons and three grandsons, along with countless others, are glad that she does.

As for her cancer, McClurkin says she received “divine healing.” Her doctor said they just administered the medicine, but God healed her — not just once, but three times. She refers to her experience with cancer and her healing as “a very humbling experience.”

McClurkin has proudly represented House District 43 for 13 years and has been cancer free for the past nine years. During that time, she led the charge to keep breast cancer awareness at the forefront of people’s minds. She has also sponsored bills to ensure that the Legislature remembers it, too.

Breast cancer awareness is not just for the month of October, but all throughout the year. All 12 months, Mary Sue McClurkin, like so many other breast cancer survivors, looks “pretty in pink.”