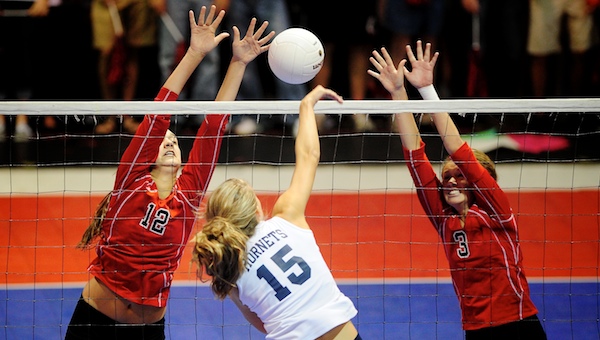 Oak Mountain's Ashton Slawinski (12) and Amanda Marks (3) go up for a block during Wednesday's game against Baker. (Reporter Photo/Jon Goering)

“We won the passion points,” Cosgrove said. “The whole team wanted to make sure we won the fourth set. We finished it off as a team.”

The Eagles advanced to the Class 6A semifinals, where they will meet Bob Jones in a semifinal match tonight at 5:30 p.m.

The Eagles took care of business early with a 25-20 win over Baker in the opening set.

Bourque recorded a kill to give Oak Mountain a two-point edge late in the second set before Baker reeled off three consecutive points to take the set 25-23 and tie the match at 1-1.

The Eagles had little trouble in the third set. Goodwin and Bourque registered two kills each in a 4-0 run midway through the set as Oak Mountain coasted to a 25-10 win to take a 2-1 lead in the match.

The Eagles secured the victory with a 25-14 win in the fourth and final set when Cosgrove pounded three kills and registered a block late in the set, which sent the sea of supporters wearing white into a frenzy just a few feet away from the court.

Oak Mountain junior Hannah Kowal suffered a torn anterior cruciate ligament early in the first set and will miss the remainder of the tournament.

FROM STAFF REPORTS The University of Montevallo volleyball team evened its season record with its fourth-straight sweep Oct. 25 at... read more