Schools have zero tolerance for bullying 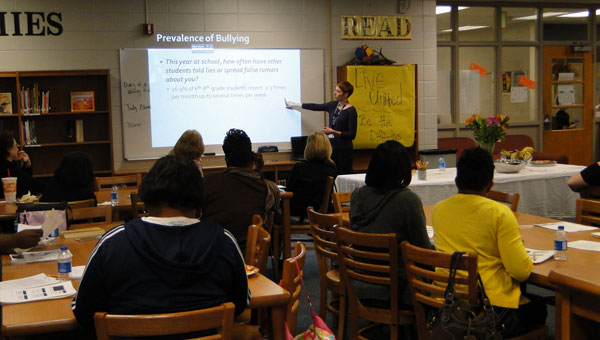 My mother shared a concern with me about a children’s sermon on Matthew 5:39, which discusses turning the other cheek. She grew up in the days of pigtails pulled on the playground and frogs and snakes hidden in teachers’ desks, but evil is present today, and her concern is the children wouldn’t defend themselves against bullying.

I made a mental note to research the scripture and did when Carol Williams from SafePlace conducted a workshop on bullying at Calera Middle School. Bullying is intentional aggressive behavior and involves an imbalance of power or strength. Typically it’s repeated over and over, and a child has a hard time defending himself/ herself. When Williams talks to students, she ensures they understand what bullying is. “Bullying isn’t getting shoved in the hallway between classes,” she said. “Bullying is about power. It can be perceived changes in power, or it can be real.”

Bullying can be name-calling and teasing or hitting and shoving. There’s even cyber bullying, using the Internet, cell phones or other digital technologies to harm others.

Williams said social bullying, spreading rumors, leaving people out of a group and breaking up friendships, is one of the harshest types. “Their social standing and feeling comfortable is a big part of their life, so when you have this social exclusion, it’s a big issue for our young people.”

A bully deals with emotional imbalance that stems from differences in popularity, intelligence, socio-economic and race — it’s not just about the little kid getting picked on. It’s normally not a one-time incident, and it happens repeatedly and over time.

Listen to your child. It’s important you ask your child about their day — most children don’t offer that up. If something has happened and an issue is reported, keep checking back to ensure it’s been resolved. Harassment and bullying forms are available in the school counselor’s office.

The best advice for your child is to report bullying.

If they are a bystander, encourage them to be supportive by inviting the victim in his/her group and report it. There are children who will stand up to a bully and say, “This isn’t going to happen at our school.”

As for the research, “strike” in Matthew 5:39 is Strong’s Concordance No. G4474 “rhapizo.” It’s a slap with the palm of the hand to insult or humiliate. Strong’s No. G5180 “tupto” is to pummel, repeated blows. Tupto is bullying. God’s word doesn’t instruct us to turn the other cheek to bullies.