Logan Holloway was raised in Shelby County and recalls her life as “normal.” She had a good family and went to church. However, something was missing. She had a “hole in her heart” and chose to fill it with “drugs and men.”

Her search for fulfillment led her to an addiction to cocaine and pregnant at the age of 18. After dropping out of school, she went out of state to have her baby and be with the baby’s father. The addiction followed them there as did Logan’s hole in her heart.

She was smart enough not to use drugs during her pregnancy, but afterwards she became depressed. “Then I started using again to numb myself from my guilt and all my problems.”

When she came home with her baby, the baby’s father followed. Their addiction led to stealing in order to get money for drugs. They had warrants for their arrest in Jefferson and Shelby Counties for property theft. She was “terrified” when she was arrested. She received youthful offender status in one and drug court in the other. When she learned to beat the system of weekly drug screens, the judge gave her a choice of three years in prison or the Lovelady Center.

That was tough, but tougher was the day DHR took her daughter away. “At that point, I had lost everything I ever had. All I had left was guilt and shame.” 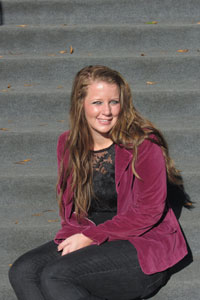 Logan Holloway turned her life around at the Lovelady Center. (Contributed)

Since that time, she has courageously and diligently worked to rebuild her life and shares it with her 4-year-old daughter, Ava.

“I am blessed to go through what I have because it has made me the person I am today. Drugs can affect anybody and I tell them that,” said Holloway. “God is leading me to help other women learn that small, bad decisions can lead you to horrible places and worse decisions that can mess up your life.”

While this is a personal story, it is one Logan shares often with others who are now where she once was – trying to fill a hole in their heart.

Getting a story anywhere you can find one

By SHELBA NIVENS / Community Columnist I was contemplating a large tooth brush display in the Chelsea Winn-Dixie when a... read more