In Old Town, the Ice and Coal Gallery is rapidly preparing to open its doors!

In the works for the past six months, owners Jeff and Rosalie Oetting will be inviting the community and art lovers from throughout the area to their open house and evening reception.

Art lovers themselves, the Oettings say they have a somewhat different perspective on the mission of The Ice and Coal Gallery.

“For starters, the artists themselves will receive 80 percent of the proceeds, with the other 20 percent going to charity,” said Rosalie.

“We also see ourselves as art educators, because each of the artists that we represent are unique with a very personal story to tell with their work. Several would be considered folk or outsider artists, and not everyone immediately understands that genre. We want to open peoples’ eyes to forms of art.”

Jeff Oetting is the owner of a consulting firm dealing mainly with publishers, but he and Rosalie, their five children and extended family are Shelby County residents, so he sought a central location for his office.

The gallery is named for Oetting Bros. Ice and Coal business, owned by Jeff’s great-grandfather in Chicago, which operated from 1897 until the company was sold in the early 60s. Here is a brief introduction to some of the artists whose work will be shown. 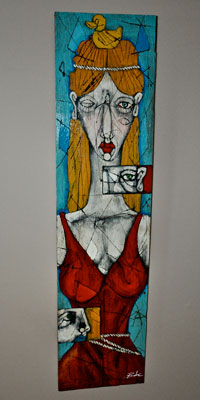 Michael Banks’ earlier work showed influences of various 20th century movements including cubism, realism and the art brut and primitive movements. During the last three years, Banks’ art has evolved into a unique style that is truly his own vision. (Contributed)

Michael Kemper, who has commented, “You see, I’m still trying to locate my place in this world, in myself. It is a sublime moment to bring a piece from the firing into the light, to curl a monotype from the press or experience the awe of something simply beautiful. This is when I feel alive and where the struggle lies.”

Eric Legge often makes a pot of coffee and paints all night. When the ideas come easily, he feels compelled to do so. His inspiration, he says, “starts in the heart. The mind perceives it, and the hand gives it shape. I think of it as a trinity, you know – heart, mind and hand.”

Other artist are Amy Lansberg, Cher Schaffer and Michael Banks, a self-taught artist from Alabama who has painted since childhood. Banks’ work is collected by lovers of self-taught art and by those with an interest in contemporary art, as well.

He was sent a last minute invitation to participate in the Kentuck Arts Festival in Tuscaloosa, in 2002. He carried almost 100 paintings and was virtually sold out in the first day of the festival.

“We also want to improve art awareness in general — perhaps we will offer art field trips for students,” the Oettings say. “And we certainly want to give back to the town.”

By LAURA BROOKHART / Community Columnist We now know that children learn best when all the senses are addressed —... read more