Quilt blocks, hand-embroidered with the names of various Helena families and others from around the area, were assembled, probably in the late 1930s, into the full-size quilt recently donated to the Kenneth R. Penhale Historic Museum.

This quilt was likely a prize in a local Methodist Church raffle, Margaret Montgomery has told Penhale. 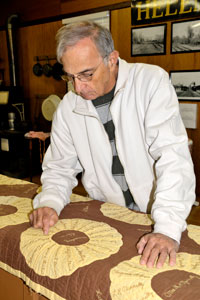 Several names still familiar today are visible in the accompanying photo — Billy J. Mullins, brother of Kenneth Mullins, Billy Harris and Marion L. Davidson. Several names appear multiple times, which would indicate they purchased more than one ticket, and not all the names inscribed were Helena residents. (Contributed)

“I believe that they probably sold tickets or chances, and each person who purchased a ticket got his name put on the square. Likely each square was assembled and embroidered by a different seamstress who then put her name in the center,” Penhale said.

The quilt was donated by Jane Naish, who inherited it from Floyd and Eloise Naish. Naish also donated the original Helena Depot sign that is now hanging in the railroad section.

The museum has acquired other items since it’s opening — a coffee grinder and two cast iron footed cooking pots, one of them a skillet. These would have been used to cook over and under coals on the hearth or fireplace.

These came from the Peal home, a log house originally off Shelby County 13 that now has been relocated to Tannehill. A photograph of the house in its original location is on display.

In the kitchen display, a large Hoosier cabinet with its distinctive combination flour-bin/sifter — a tin hopper that could be used without having to remove it from the cabinet has been donated by Ivy Penhale and was previously owned by retired minister Addie Deviner.

Just this past week, the original 1908 corner stone from Helena’s Masonic Lodge was returned from the Alabaster Masonic Lodge, whose members voted to return it. The Helena and Maylene Lodges consolidated around 1935 after the tornado, and when they vacated the space some three years ago, the members removed the stone to their new location.

“When I was looking at the building’s foundation as we began renovating, I saw a hole in the front right that I couldn’t then account for,” Penhale said. “The stone would have been placed so that the inscription showed, but the Masonic emblem hidden.”

Brian Wallis, museum volunteer, has been assisting Penhale with various projects the past few months. Wallis has worked on digs in Nuremberg, Germany, Lake Toplitz, Austria and also at Moundville with the Alabama Archaeological Society.

Penhale said he is grateful, this Thanksgiving, for all the help and donations everyone has contributed to the museum. The museum is still searching for an old chalk blackboard for the schoolroom display, should a reader know of such.

By LAURA BROOKHART / Community Columnist In Old Town, the Ice and Coal Gallery is rapidly preparing to open its doors! In... read more