Gladys Sherrer’s inspiration for her new novel has been the 500,000 children abandoned annually in the United States, she said, along with a compassionate adult from her own childhood and Cain’s words to God in Genesis 4:9, “Am I my brother’s keeper?”

“Touch a person with tenderness, and you’ll give them love,” Sherrer said. “Touch them with love, and you offer hope for eternity.”

This message is highlighted in Sherrer’s “The Mall Street Sleuth” through one abandoned child’s story – her trials, determination and triumphs. The abandoned young girl, who is bullied and harboring suicidal thoughts, makes a decision to never quit. She bucks up and becomes a crime fighter, turning tragedy into triumph.

This coming-of-age plot includes other younger generational threats like addictions and pregnancy, and shows the way to Christ. Sherrer said the novel began as a short story written when she was living in Phoenix, Ariz. in 2006. 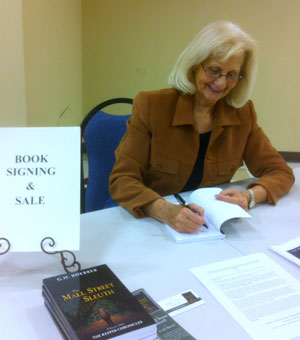 After returning home to Birmingham, she joined a writer’s workshop and was encouraged by novelist Anne Nall Stallworth to make it into a novel.

“Four years later it is a novel which earned an award from Alabama Writers Conclave,” she said.

“The Mall Street Sleuth” is volume one in Sherrer’s “Mysteries with a Message” series, titled “The Keeper Chronicles.” It is a book club edition with questions in the back to lead in discussion, and will soon be available on eBook, she said.

More than 20 copies of “The Mall Street Sleuth” were placed in the hands of readers at a recent signing and sale at North Shelby Baptist Arts and Crafts Fair. It can be purchased at Amazon.com and BuyBuyBooksOnThe Web.com or ordered toll-free at 1-877-289-2665.

Sherrer has worked as a columnist and journalist (She wrote for the Shelby County Reporter 2007-2010), and a health information services project director, where she did extensive writing.

This, her first novel, is “a message of hope, perseverance and determination for the world’s youth,” Sherrer said, “and a call to action for the forever young.”

Gladys Sherrer can be reached at ghsherrer@gmail.com.