Hoover business opens with a bang 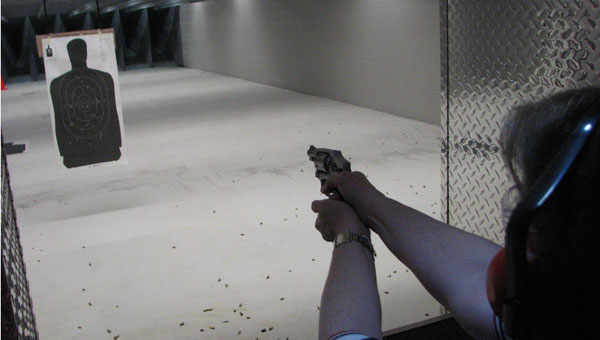 Hoover has a new business that recently opened up with a bang – thousands of bangs to be exact.

I took one of my sons to the recent grand opening of Hoover Tactical Firearm’s indoor shooting range.

We greatly enjoyed practicing our Second Amendment rights at the only facility of its kind in our state. We had a blast – pun intended.

The facility is conveniently located on U.S. 31 in the old Bruno’s Shopping Center. The 5,200 square-foot facility has 12 handgun lanes, eight rifle lanes and a simulator — those used for law enforcement training. It can be used by any member of the facility who schedules an appointment. It is the only simulator of its kind east of the Mississippi.

Members can also request personal training from one of the facility’s employees, many of whom are active and former members of law enforcement and the military. One such former law enforcement officer is managing partner of the facility, Peyton Zarzour. With more than a decade of service to the Hoover Police Department, he is more than qualified to operate the state-of-the-art facility.

With more than 700 members, Hoover Tactical is already planning an expansion of seven additional lanes within the next 18 months.

They also plan a Ladies Night and other basic gun safety classes for various groups of all ages.

They have a huge showroom of new and used guns and ones you can rent to shoot. You can also pay a nominal fee to “test drive” a gun. If you purchase it, the fee goes toward the price – the only program of its kind in the state.

They offer ammunition, accessories and even a deli that will open next week. Members get special discounts and opportunities like the combination to a members-only lounge with televisions and an area to clean guns.

There are more than 700 members already, and the recent grand opening hosted more than 1,000 people.

Memberships are $350 per person plus tax, which allows each member and a guest to shoot at each visit throughout the year and all other membership perks. Discounted prices for active members of the military or law enforcement are $275 each.

Helena Christmas parade on its way

Girl Scout Troop 581 went all out – note their little quacker lips – for its float in the Helena... read more