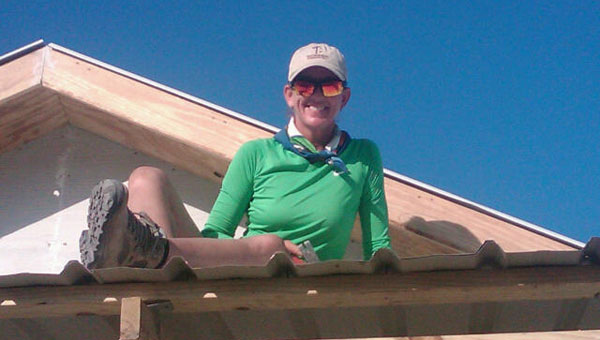 Alicia Huey celebrates the final touches on one of her Habitat for Humanity Homes. (Contributed)

Alicia Huey wanted to be a schoolteacher when she grew up. She attended college and majored in early childhood education but became a homebuilder.

“My experience with children helps me better deal with sub-contractors,” she joked.

She soon found her second love would become her first. She is one of less than 20 women homebuilders in the state. When asked if she played with dolls when she was younger and that’s what made her want to be a schoolteacher she said, “Yes, but I liked to play with Lincoln Logs too.”

Huey says the association provides support and educational opportunities to women who work in the male-dominated industry.

“Women homebuilders are organized and communicate better with the women who tend to make the decisions in buying and building their families’ homes. We better understand what they want,” she said.

Huey first became interested in building houses through her work with her husband in title insurance but has been building houses for 12 years.  She has also worked with Habitat for Humanity and just returned from a week in Haiti, where her group built 100 houses.

Former President Jimmy Carter, the First Lady, Garth Brooks and Trisha Yearwood were part of Huey’s group. She flew on the airplane with them, and they all shared meals together. One night Garth and Trisha even served the volunteers dinner.

“They were nice and down-to-earth. They worked just as hard as everyone else did,” said Huey.  “One night we had a fireside chat with President Carter, and he shared his passion of Habitat for Humanity and the work being done at the Carter Research Center.”

When not building houses, Huey enjoys spending time with her two Chinese crested powder puffs, going to the lake and cooking. She is a graduate of Leadership Shelby County, a member of the Southern Women’s Committee of 50 and Asbury United Methodist Church.

By LAURA BROOKHART / Community Columnist Katie Allen has been hand-painting Christmas ornaments for the past 12 years; she conceived... read more