Katie Allen has been hand-painting Christmas ornaments for the past 12 years; she conceived the idea when she needed a gift for a teacher and wanted it to be something meaningful.

Each ornament is a unique inspiration, and Allen prays over it while she paints.

“After I lost my job eight years ago, a friend told me, ‘you need to make this your business.’ That year, I was able to sell enough ornaments for our family to have a good Christmas.”

Allen said the ornaments have helped meet her needs, and now that she is working again, as an instructional aid at Pelham High School, she uses the money to do good for others, such as assisting with medical bills.

She has fulfilled some special requests along the way, such as a special ornament inscribed with Braille. And she created 250 snowflake ornaments for a December wedding. 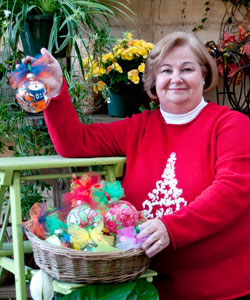 Helena’s Katie Allen and one of her hand-painted ornaments. (Contributed)

She has made a tradition of sending one ornament to the White House Christmas tree each year and her 2011 ornament honors student Carson Sumpter, who made his transition this past July. Allen also painted the Spirit Stick presented to Sumpter in spring 2011 when his fellow students honored him as the first individual ever to receive it.

“Carson touched my life, as he did so many others. Last year my daughter, Courtney, marched right in step behind him in every PHS band performance.”

Courtney is now attending Huntington University studying to be a pediatric chaplain — something Allen says her daughter has long aspired to do. Her son, Michael, is a junior at PHS.

Allen creates, of course, ornaments for Alabama fans that say ‘This Is the Way We Roll’ and tiger-themed ornaments for Auburn fans. This year she added a Toomer’s Oak ornament.

At the Pantherettes Holidayz Christmas Market, Allen was showing her first black-and-white-themed ornament, a nativity scene, along with those colorfully embellished with holly, poinsettias and baby’s first christmas.

Allen shares that she has been communicating via Facebook for about three weeks with a former student who requested a football player ornament his senior year. Now Karl Bongers is stationed in Afghanistan with the U.S. Army and wants another ornament.

“When I asked him if he wanted me to keep it here until he returns he said no, he wanted to hang it in his tent,” Allen said. “That’s another first! The ornament will be on its way across the ocean by the time everyone is reading this.”

Helena Christmas parade on its way

Girl Scout Troop 581 went all out – note their little quacker lips – for its float in the Helena... read more