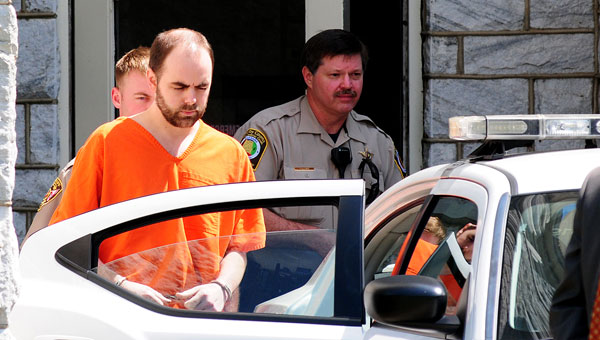 Bart Wayne Johnson gets into a police car during his trial for the murder of Pelham police officer Philip Davis. Johnson was convicted and sentenced to death. (File photo).

We take a look back through the biggest storylines and biggest names of 2011.

A Christmas Eve 2010 misdemeanor theft arrest by the Alabaster Police Department led to indecency with a child charges and an extradition of a Pelham resident. Alabaster Police arrested 35-year-old Pelham resident Mario Roberto Eulogio on one count of third-degree theft of property, a misdemeanor charge. When officers ran Eulogio’s name through the national crime database, they discovered the man was wanted by Harris County, Texas, on two indecency with a child charges related to a case under investigation by the Houston Police Department.

Calera High School Principal Richard Bishop was arrested for alleged third-degree harassment after a Thompson High School assistant principal complained to police following an incident at a basketball game at Thompson High School in December. Bishop, who was arrested by the Alabaster Police Department at 2:43 p.m. on Dec. 17, was allegedly involved in an incident involving both students and school personnel at the Dec. 16 game between Calera and Thompson.

Gene Scott, 59, owner of Pee Wee’s Pawn Shop off U.S. 31 near the Chandalar subdivision in Pelham, died after his multi-engine Beech BE58 aircraft crashed near the intersection of Seventh Avenue North and 80th Street in Birmingham at about 7 p.m. on Jan. 5

Gadsden resident John David “JD” Smith IV, 23, was shot once with a handgun in an accidental shooting on Thursday, Jan. 13, inside Anthony’s Jewelry and Pawn, located at 4673 U.S. 280. Smith died later that afternoon.

BENTLEY SWORN IN AS GOVERNOR

Only 60 miles from his hometown of Columbiana, Shelby County native Robert J. Bentley was sworn in Jan. 17 as the 53rd governor of Alabama. Bentley and other state-elected officials took the oath of office on the steps of the state capitol building at noon following an inauguration parade in downtown Montgomery.

Shelby County Circuit Court Judge Hub Harrington was struck by a car while in Arizona to see the Auburn Tigers play in the BCS National Championship game.

Alabama Gov. Robert Bentley returned home Sunday afternoon, Feb. 6 for Shelby County’s 193rd birthday celebration. At about 1:30 p.m., the governor and First Lady Dianne Bentley, flanked by a small security team, walked from the church to the old Shelby County courthouse, with American flags displayed from every light pole along the way down Main Street.

Calera High School Principal Richard Bishop pleaded guilty to a misdemeanor third-degree harassment charge Jan. 26 stemming from an incident at a basketball game between Calera and Thompson High School at THS in December. Thompson Assistant Principal Angela McKnight filed the charges after the incident, alleging Bishop grabbed her arm and jerked her toward him. Bishop was fined $673 and placed on two years probation.

Breaths were held throughout Palmer Auditorium Feb. 12 as the Student Government Association president parted the sea of purple- and gold-clad students on stage to announce the winner of the 93rd annual College Night. After the traditionally drawn out speech of SGA president Patrick Talley, Gold was announced the victor when he concluded with their side’s catch phrase, “This is our fairy tale.”

Shelby County saw a major population boom in the last 10 years, according to 2010 Census information released Feb. 24 from the U.S. Census Bureau. Shelby County’s population increased by 36 percent to 195,085 between 2000 and 2010, according to the census. Shelby County is now the fifth-largest county in the state, trailing only Jefferson, Mobile, Madison and Montgomery.

It was, both sides agree, a case of mistaken identity. In 2010, the Shelby County Sheriff’s Office issued an arrest warrant for Kenneth Dukes, charging the 43-year-old Montevallo pastor with unlawful possession of a controlled substance after someone who looked similar to him sold marijuana to a confidential informant. It was a mistake, the sheriff’s office said. Dukes never sold marijuana to anyone.

The Shelby County Board of Education hopes to open the previous Shelby Academy property as a Calera middle school by the fall of 2012 after recently closing on the purchase, said Superintendent Randy Fuller. The board of education paid the Shelby Academy Board $1.3 million for the school’s property and buildings.

HealthSouth will file a certificate of need application with the state March 30 to bring an inpatient rehabilitation hospital to the Interstate 65 corridor. The proposed hospital would provide an array of inpatient rehabilitative services and would include 34 inpatient rehab beds. Of those beds, 17 would be new and 17 would be transferred from the former Carraway Medical Center in Birmingham. The project could bring as many as 120 full- and part-time jobs to the area if approved. The projected total cost for the project is about $17 million.

Two patients died at Shelby Baptist Medical Center in Alabaster after they received an intravenous total parenteral nutrition supplement. The patients were among five people at the hospital who developed a rare blood-borne bacterial infection after receiving the TPN supplements.

Pelham will not transform the Pelham Civic Complex main ice skating rink into a fire museum, and instead could locate the museum on Lee Street or construct a new building to house it.

Students likely will begin attending a Helena high school in the fall semester of 2013, after the Helena City Council voted to raise the city’s sales tax during its April 25 meeting. During the meeting, the council voted 5-1 in favor of raising Helena’s sales and use taxes by 1 cent each.

County Manager Alex Dudchock recommended a Calera site for a proposed fire museum at a County Commission work session April 11. The Calera plan was chosen over two proposals from the city of Pelham to locate the fire museum within Pelham city limits.

Shelby County avoided any significant damage last week when an outbreak of tornadoes wrecked havoc across the state. Shelby County’s Emergency Management Director, Jeff Edwards, said no tornado occurred last Wednesday night, April 27, in the county, though chances were ripe for such an occurrence.

In 1973, 12-year-old Kathy Strong wished for a Vietnam War MIA bracelet in her Christmas stocking. On May 13, 2011, after 38 years of waiting, Strong will remove the bracelet bearing the name James L. Moreland, as Moreland’s remains are coming home.

At 5:32 a.m. May 5 Rebekah Kendrick’s phone rang. The caller was a neighbor, who told her Coosa Valley Milling was on fire. “I just live the next street over, so I ran to my back door and looked out and saw the smoke,” said Kendrick, who has worked at the mill for the last two years. Part of her job is helping owner Frank McEwen make his world-famous grits.

A jury of eight men and four women deliberated for nearly seven hours May 13 before recommending convicted cop killer Bart Wayne Johnson be put to death by lethal injection.

The recommendation came one day after the jurors found Johnson guilty of the Dec. 3, 2009, fatal shooting of Pelham police officer Philip Davis.

NEW SCHOOLS TO OPEN IN HELENA, CALERA AND CHELSEA

The last week of May, hundreds of high school seniors walked across various stages across the county to receive their diplomas. Approximately 1,739 students graduated from Shelby County Schools, said Cindy Warner, Shelby County Schools spokeswoman. Approximately 354 graduated from Spain Park High School, which is in the Hoover City School district.

Alejandros Castaneda has pleaded guilty to a lesser charge for his 2008 part in what authorities allege was a murder-for-hire plot over missing drug cartel money. In exchange for his testimony against the remaining five defendants, Castaneda pleaded guilty to intentional murder and will serve two consecutive life sentences, Shelby County District Attorney Robby Owens said.

A 7-year-old girl drowned at the Oak Mountain State Park campground beach May 28 after the child separated from her parents and entered the lake. The incident happened at about 2:30 p.m. when Birmingham resident Brianna Bryant entered the lake alone.

JUDGE OVERTURNS APPROVAL FOR ER ON 280

By NICOLE LOGGINS / Staff Writer Columbiana Mayor Allan Lowe will address the public on Jan. 3 during the regular... read more