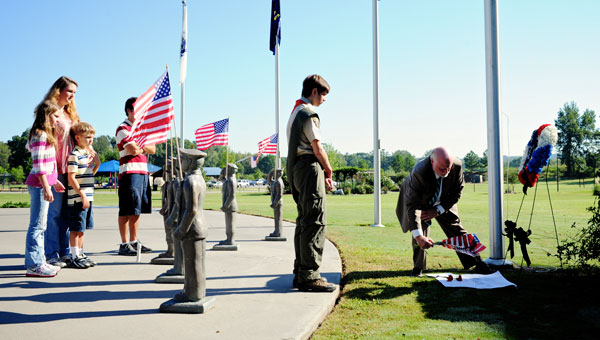 We continue our look back at 2011’s most important news stories.

Jim and Carol Howard moved into their dream house near Dunnavant Valley in January of 2009, and they sunk their funds into the home to purchase it outright. Now, after two years of searching for an alternative, they’re apartment hunting. They’re drastically downsizing because of their dream home’s single fatal flaw: Chinese drywall.

A woman and her infant daughter were declared dead July 15 and a man was charged with capital murder after what police said was the first double homicide in Alabaster’s history. Columbiana resident Tryphena Lacey, 24, and her daughter, 9-month-old Trinity Lacey Patterson, died after police said the victims were stabbed at the Shelby Motor Lodge off U.S. 31 in Alabaster. The male, 34-year-old Lutcher, La., resident Terrance Patterson, was treated for minor injuries, before he was arrested and charged with capital murder.

In April, Hoover Mayor Tony Petelos took three weeks off from his duties as Hoover mayor to travel to a place about as far as he could get from Hoover — both physically and figuratively. Along with seven others, Petelos flew to Nepal to conquer his long-held dream of seeing and hiking part of Mt. Everest.

A federal grand jury on July 26 indicted an Uzbek national who was staying at a Pelham extended-stay hotel on charges of threatening the life of President Barack Obama and illegally possessing weapons. The indictment was filed in the U.S. District Court, and charged Ulugbek Kodirov, 21, of Uzbekistan, with four counts of threatening the president — on July 9, July 10, July 11 and July 13.

UNIVERSITY OF MONTEVALLO’S SHACKELFORD DIES AT 59

A Shelby County judge last week set an Oct. 31 trial date for the man accused of being the ringleader in the brutal torture-killings of five men at a U.S. 280 apartment complex in August 2008. Circuit Judge Dan Reeves set the trial date during a status conference Aug. 9 for Christopher Scott Jones, who is charged with two counts of capital murder.

A man authorities said was living in a Pelham extended-stay hotel when he was charged with threatening the life of President Barack Obama pleaded not guilty to the charges in a U.S. District courtroom Aug. 11. Uzbek national Ulugbek Kodirov pleaded not guilty to four counts of threatening Obama, one count of receiving and possessing an unregistered grenade, one count of being an illegal alien in possession of a firearm and unlawfully possessing a fully-automatic weapon, said his attorney, Lance Bell of Birmingham.

J.C. Peeples of Columbiana never thought he and his wife, Stacy, would be part of a group bringing home an alligator jackpot when his friend Keith Fancher of Chelsea won a lottery to go gator hunting in south Alabama and invited the couple along for the trip. Hours after the group launched a boat at Rolling Cooper State Park in Wilcox County, the Peeples, in a group of seven friends and family members, slowly made their way back up the Alabama River in the middle of the night with an Alabama state record 14-foot, 2-inch gator, which tipped the scale at 838 pounds.

NOT GUILTY PLEA FOR MAN CHARGED WITH MURDERING WOMAN, BABY

Shelby County was recently named one of the best counties in the country for job growth over the past decade by CNN Money, and Alabaster and Pelham were named major contributors to the county’s double-digit job growth.

The Pelham Fire Department has had a HAZMAT team since the mid-1980s. Prior to 9/11, the team had to “scrounge, beg and borrow” funds for supplies and responded mostly to potentially dangerous accidents involving mostly flammable liquid spills, according to Pelham Battalion Chief Blair Sides. But after 9/11? Things changed, said Sides, who is the director of the Pelham Hazmat Team, which serves all of Shelby County.

Alabaster could benefit from forming its own school district, but likely would have to either raise the city’s sales tax by 1 cent or raise its ad valorem property taxes, a consultant told the City Council during a Sept. 7 meeting. During the meeting, Ira Harvey, who was hired by the council a few months ago to conduct a city school district feasibility study, recommended the city add about $3.6 million in annual school expenses if it decides to break away from the Shelby County School District to form an Alabaster school district.

BOARD OF EDUCATION APPROVES $281.6 MILLION BUDGET

The Shelby County Board of Education approved an approximately $281.6 million budget for fiscal year 2012 during its Sept. 15 board meeting. Gary McCombs, assistant superintendent of finance, said the budget was “conservative,” and he felt that it would meet the needs of the school system.

PETELOS TO BE FIRST JEFFCO MANAGER

The Montevallo City Council unanimously voted to pass a resolution to increase the city’s general sales and use tax from 3 to 4 percent during its City Council meeting Sept. 26. The money is intended to be used to revitalize the city.

A Birmingham attorney recently filed a lawsuit in U.S. District Court alleging several cities, including three in Shelby County, have been discriminating against Hispanic residents. The lawsuit, which was filed Sept. 23 by Birmingham attorney George Huddleston III, claims the cities of Pelham, Alabaster, Hoover, Leeds and Irondale have “unconstitutionally” discriminated against its Hispanic residents.

The Alabama Court of Criminal Appeals has ordered a new trial for a former Vincent pastor serving a life sentence for killing his wife. A Shelby County jury convicted Timothy Dale Tillman of murder for the Oct. 26, 2005 shooting death of his wife. The jury also convicted Tillman of one count of possession of a forged instrument. He was sentenced Dec. 14, 2009. The appeals court ordered the new trial in a 3-2 ruling Sept. 30.

The Alabaster City Council voted during its Oct. 17 meeting to form an Alabaster school district separate from the Shelby County School District and to raise the city’s sales tax by 1 cent beginning Dec. 1.

SHERIFF’S EMPLOYEES TO GET RAISES

The man authorities alleged was the ringleader of the 2008 U.S. 280 apartment slayings has pleaded guilty. The trial for Christopher Scott Jones was scheduled to begin Oct. 31, but Jones pleaded guilty Oct. 28.

A Nov. 1 house party in the 100 block of Lighthouse Drive in Alabaster led to the arrest of 11 people after police responded on a noise complaint.

Five schools will do plenty of traveling in the direction of Montgomery during the next two years, with Chelsea, Spain Park, Oak Mountain, Pelham and Thompson joining Alabama High School Athletic Association Class 6A, Region 4, which was created in the association’s new classification and alignment Nov. 16.

A man participating in a controlled deer hunt Dec. 12 at Oak Mountain State Park suffered a single gunshot wound to the chest after falling out of a tree stand, said Oak Mountain State Park Superintendent Michael Jeffreys. Jeffreys said the man, who is in his late 30s to early 40s, was shot by the handgun, which discharged from his pocket when he landed on the ground. The man was airlifted to UAB hospital.

Two former Alabaster Police Department employees recently sued the department, claiming they were fired from the agency in 2010 based on racial discrimination. Birmingham attorney George Huddleston III filed the suit in U.S. District Court in early December on behalf of Calera residents Leonard and Rebecca Hicks. From 2006-2009, Leonard Hicks, who is black, served as an Alabaster police officer and Rebecca Hicks, who is white, served as an APD dispatcher.

Bart Wayne Johnson gets into a police car during his trial for the murder of Pelham police officer Philip Davis.... read more