Austin Foster was born to sing 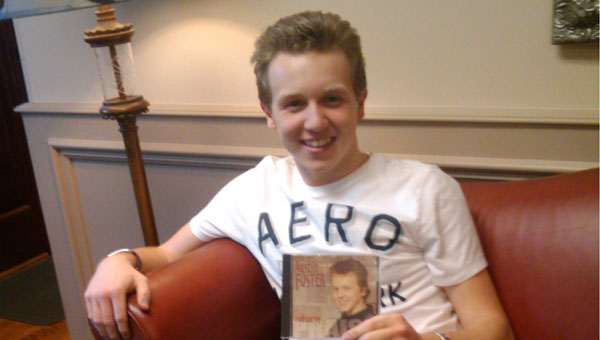 Upon first meeting Austin Foster he looked like a natural-born musician to me.

It wasn’t his hair or the clothes he wore, it was his mannerisms, his demeanor — his very essence.

He looked like one of those people who came into this world to play a musical instrument and sing. It might have been because he was.

A Shelby County High School junior, Foster sings in the choir and show choir and plays the trombone in the band.

He is a member of the Beta Club and has a personality beyond measure.

He is the pianist at South Shelby Baptist Church and plays the guitar and drums.

His favorite instrument is the piano, and gospel music is his genre.

He has recorded two CDs, “On a Journey” and his latest released in August of last year, “I Will Cast My Praise.” He has sung with his favorite gospel singer, Michael English, the Perrys, the McKameys, Guy Penrod, Gold City, Bryan Free and Assurance.

His highest accomplishment came when he was one of only 20 new artists to sing at the National Quartet Convention’s Southern Gospel Promoter’s Association Showcase Concert.

Foster sang his first solo when he was 4 years old.

His grandfather, who sang in the choir at Bethel Baptist Church, was trying to learn a solo and just couldn’t get it right. Austin had heard the song and asked him if he could sing it himself.

He did, and a star was born.

Since that moment, Austin knew what he wanted to do the rest of his life.

His long-term goal is to attend Belmont College in Tennessee to pursue a musical degree. When asked what the future holds for him his reply is simple, “Whatever God wants me to do, I’m gonna do it.”

Foster will participate in an event Jan. 13 at 7 p.m. at Concord Baptist Church in Calera along with the Melody Boys Quarter and the Waltons.

Foster said, “I feel closest to God when I am singing a gospel song. If I can give back a song that blesses just one person . . . that’s all it takes for me.”

From someone who has enjoyed both of his CDs, I can tell you from personal experience that he’s already done that.

I guess he really was born to sing.

Pictured with the new flag raised in the Riggs’ yard in their honor are Lowell G. Holmes, A.P. (Pete) Holmes... read more