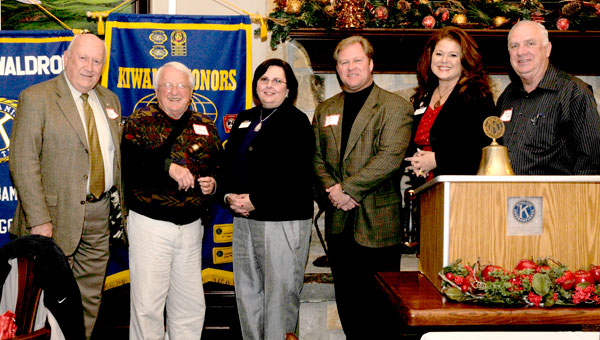 Originally chartered on Oct. 2, 2001, members gathered at Timberline Golf Club to commemorate a decade of progress and projects.

Waldrop credits Harold and Claudia Deason, charter members, with giving the club a place to meet and eat — recalling Harold’s early Tuesday mornings at Incahoots preparing and cooking for the club.

The club’s first project, Waldrop recalled, was at an early Buck Creek Festival where they raised $92 selling Pepsi Cola. Waldrop said he had never worked so hard to earn money, with the club receiving 10 cents for each Pepsi sold, an admission that was greeted with laughter all around.

Waldrop also thanked charter member, Helena Elementary School Principal Mary Cooper, who has been involved through the years as Kiwanis Secretary and in conjunction with Pancake Day at HES.

The Boundless Playground is the largest project the Helena Kiwanis has completed and the one of which they are most proud. Waldrop thanked Ray Burrow, 2001-2002 lieutenant governor Division 5, Vestavia-Hoover Kiwanis and Steve Cragon, sponsor and new club builder, saying their help was indispensable.

Cragon spoke of how, on Sept. 11, 2001, he was sitting in the Helena McDonald’s ready to speak with Waldrop about the new club forming. Not long after arriving, and soon after the first plane hit the World Trade Towers, he received a call to go to New York City.

Helena Kiwanis Club was chartered with 32 members. They have recently welcomed new members Daniel and Meg Baron and Jarrod and Katie Gibson. Daniel Baron is the new manager at Ace Hardware and the Gibsons have recently opened State Farm Insurance on Shelby County 52.

Pictured with the new flag raised in the Riggs’ yard in their honor are Lowell G. Holmes, A.P. (Pete) Holmes... read more