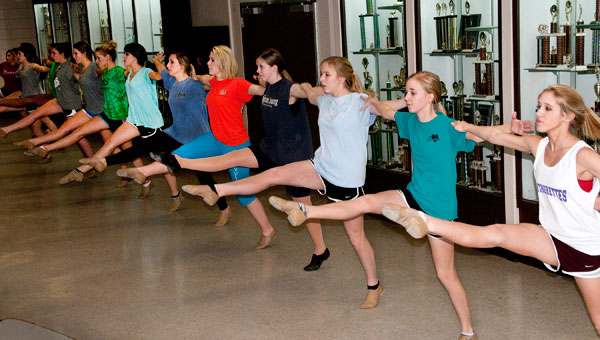 The Pantherettes Dance Team is making PHS proud, recently returning home with the trophy for first place overall in the state competition held mid-January at Samford.

The Pantherettes will be performing at the annual fund-raising presentation, With Every Beat, on Feb. 11. This collaborative program will also include students from Thompson High Dance Team, Dance Et Cetera, Grebel Dance and other local groups.

Savanna Windham, now in her third year on the dance team, said that she has seen the camaraderie of the Pantherettes become more close-knit. Their leadership skills have grown as they have learned to work together.

“We get along, we have a strong work ethic and we are willing to put in the time and be patient as we work through our practice,” Windham said.

Windham has been dancing for 10 years, including six years of competitions, but now gives her 100 percent effort to the Pantherettes.

A self-professed tomboy growing up, Windham’s mother persuaded her to stay with dance, which became easier once she understood the benefits — staying fit and healthy and having an outlet for emotional and stress relief.

“They say, ‘Dance like no one is watching’ — you pour your heart and soul into it. I know now I would not have been happy doing anything else.”

Windham was solo state champion for both 2010 and 2011. She danced to “Someone Like You” by Adele, a lyrical routine she choreographed herself.

Practices for the dance team encompass about 18-20 hours each week, and 30 plus hours when they are preparing for competition.

The girls all credit Laura Cochran, their long-time coach, for much of their success.

“She is so experienced and works so well with teenagers,” Windham says.

Cochran has been color guard, majorette and dance team sponsor during her some 15 years at PHS.

“She is like our second mother,” the girls say.

Maddie Gathings, also a junior, said dance team girls are her support system and friends she can depend on.

“Laura and Liz (former Miss Alabama, Liz Cochran) stand side by side helping us. They instill in us a faith based in God and keep us humble.”

Gathings and Hayley Barber will be marching in the 2012 St. Patrick’s Day Parade in Chicago.

With Every Beat is dedicated to raising money/awareness for Children’s Miracle Network and this year, Relay For Life, in memory of PHS student Carson Sumpter.

The Pantherettes will have just returned from competing in the Dance Team Nationals at Disney World, Feb. 4-6, prior to With Every Beat.

By LAURA BROOKHART / Community Columnist Let me tell you a story about a chicken named Buttless. Doesn’t that sound... read more