Beauties and boys of the pageant 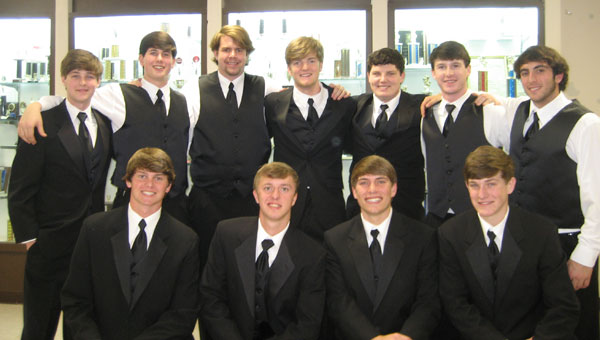 “Could you tell I slipped?”

“I know you saw Rob step on my dress!”

These were Miss PHS contestants’ remarks last weekend when I stepped backstage to take some photos.

This first intermission is a relaxed time. The girls enjoy one another’s company and wait for their next curtain call when the top 25 will be announced. Around the corner, the pageant escorts have their own dressing rooms complete with chips and cookies.

As the mom of a Miss PHS escort, these past two pageants have been tough for me.

Through the years, I’ve watched these junior and senior boys run bases, score touchdowns and sometimes fall over their own growing feet. Seeing them onstage in the vicinity of expensive dresses with flowing trains is sobering. While they look like grown men in their tuxes, they’re all still boys at heart.

“I liked having an escort because he made me feel like I wasn’t completely alone onstage. That calmed my nerves,” sophomore contestant Madison Smith said.

“I enjoyed being a Miss PHS Escort because I got to see how difficult pageants really are for girls,” Justin Forehand said.

Forehand, who is an offensive lineman signing a scholarship with UAB, knows the definition of difficult. He’s faced down the toughest defenses in Class 6A football-and sidestepped tricky trains on stage.

Thanks to Saturday morning interviews, on-stage questions and the presence of escorts, the Miss PHS pageant allows students to master more real-world skills.

“I learned how to present myself in a professional manner and what to expect in future interviews,” Newly crowned 2012 Miss PHS Bethany Wood said.

“I realized that you have to be prepared for any question that comes your way in an interview,” sophomore contestant Kaitlin Moon said.

“Being an escort is an honor because the teachers nominate you because they see you as a role model,” said Ty Pierce. “Also, I just like wearing a tux.”

Facing the crowd together, offering support and stepping back to let others shine are certainly adult skills. Perhaps these boys are closer to manhood than I suspected.