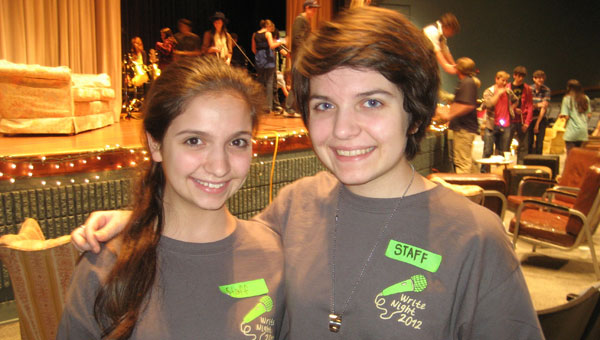 “Write Night is your party,” I tell the Literary Magazine staff. “You have to make it happen.”

My staff knows I am not an event planner.

“Write Night must go on,” becomes a mantra once January begins. This celebration provides PHS writers, songwriters and musicians an audience and serves as the primary fundraiser for our Literary Magazine.

The auditorium lobby is crowded with tables serving food donated by area restaurants and seating students for snacks and conversation. Auditorium lobby tables and walls are covered with black paper, and students are encouraged to use chalk to write on any area of black paper not covered by art or photography, which is on display courtesy of PHS art teachers and students.

New attractions this year include a table providing information about our school’s Invisible Children chapter, which works toward freeing children who are being forced into foreign military service. Write Night’s crowd donated more than $200 thanks to the impressive job the group did attracting attention to their table-and thanks to the compelling message and performance delivered on stage by sophomore Jessica Lingle, who is devoted to the Invisible Children movement.

Many students also commented on the amazing musical talent, including singers, guitarists and bands.

Write Night continues to grow. The night runs long due to a multitude of talent. Student reviews will help improve Write Night 2013.

“I have to admit that I was completely unaware of the talent going on at this school. Speaking of talent, those who set this night up have tons of it,” junior Tatum Sparks said. “The decorations were beautiful, the stage well-equipped. In a word: perfection.”

Honestly, Write Night is never perfect. But with energetic and creative students shooting for perfection, Write Night rolls on — with excellence.

Beauties and boys of the pageant