County’s ‘Biggest Loser’ is a winner 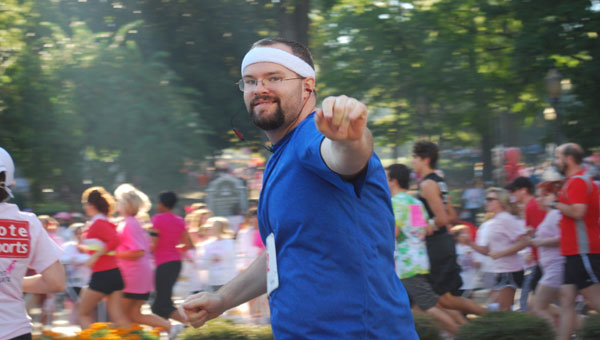 Jeff Vreeland completed his first 5K at the Race for the Cure. (Contributed)

As a self-professed computer geek, Jeff Vreeland always sat behind a computer. While it was a successful career in technology, it was not conducive to a healthy lifestyle.

When his daughter, Victoria, was born in 2008, he decided to make a change. “I realized I wanted to always be around for her,” Vreeland said.

At 362 pounds and 27 years old, Vreeland knew he might not be if he didn’t change his lifestyle. After receiving encouragement and support from his wife, Jenny, he sat out on his journey.

Vreeland started eating right and exercising. He can run up to eight miles a day and enjoys running in 5Ks. He has gained self-confidence and accomplished things he once never thought possible.

Jeff said he hopes to one day write a diet book. If he does it will be the shortest one ever. The title will be “Exercise more and eat less.” That is all there is to it according to Vreeland, who has lost 118 pounds over a two-year period.

A huge fan of Ranch dressing, he thought he would have to forego it forever. Then he learned to incorporate it into his diet as long as he ate it in moderation.

Planning is a critical part to anyone’s diet plan. When we talked on Feb. 6, he already knew where and what he would eat for Valentine’s Day – a Ruth’s Chris Steakhouse steak, creamed spinach and even some au gratin potatoes.

That is the benefit of his newfound ability to count and manage his calories so that he can eat whatever he wants in moderation — as long as he also exercises.

The advice he gives to others seeking to lose weight is this: “Anything you do has to be enjoyable. You are not going to give up eating fast food – life is too complicated. Make changes you can do for the rest of your life and also make small goals that you can achieve.”

He chronicled his journey and you can read it at Socialjeff.com.

Vreeland has many reasons to be thankful for his diet and exercise program, but among the top two are his wife and 3-year-old Tori.

By LAURA BROOKHART / Community Columnist Guy Nelle Davis has known some high-flying moments in her life, all — she... read more