Guy Nelle Davis has known some high-flying moments in her life, all — she is quick to point out — under the protection of the Lord’s mighty wings.

At 95, Davis, grandmother of seven and great-grandmother of 14, enjoys people, her daily walks around Maplewood Lane Assisted Living and her daily Bible studies — always a part of her life.

Ask Guy Nelle Davis how she is doing and she will tell you, “I’m like Minnie Pearl. I’m so glad to be here.” (Contributed)

She is also known, on occasion, to kick up her heels doing the Charleston, her daughter-in-law Liz Davis said.

Her unusual name came about because, “I was supposed to be a boy. They named me Guy, after my daddy, and added the name of female cousin.”

Davis met her husband, Noah Columbus Davis, three years her senior, at a high school basketball game, at which she was a cheerleader.

“When he asked me to marry him, I told him I was too young. He begged me to please marry him before someone else got me.”

They married when she was 18 and celebrated their 50th anniversary in 1985, three years before Noah passed on. 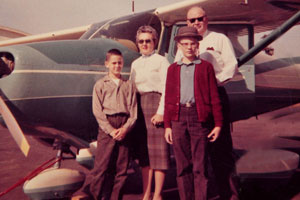 Noah and Guy Nelle Davis with sons, Jerry and Doug, on the airstrip in Athens in the 1950s. (Contributed)

On the farm they built “in the middle of a cornfield” in Winterville, Ga., the Davises raised three boys.

Living virtually at the end of the runway of the Athens airport, Noah Davis learned to fly and often took his sons with him.

“That’s when I decided I better learn to fly, too,” said Davis, “because if something happened to Noah, I wanted to be able to take over and bring my sons home safely.”

She belonged to the Athens Flying Club, which had four or five women members, flying a Cessna Skylane. Every evening after supper, she and Noah took “a little ride” over Winterville.

“I was never afraid,” Davis said. “We would say a prayer before going up and I put my trust in the Lord.”

The Davises were big Georgia football and basketball fans, season ticket holders. And Guy Nelle was Den Mother for her sons’ Cub Scout years. She took them on field trips to the local fire station and fire tower and flew them up to see the aerial view of their homes.

She recalls one quavering scout asking, “Are you sure you know how to land this plane, Mrs. Guy Nelle?”

Sons Jerry and Lamar Davis live in the area. Her eldest son, Doug, an A3D Naval navigator, was killed in Italy when he was 25.

“Doug was a dynamic Christian as a young man and during college at Auburn. His friends all said that he would be holding open the gates of heaven when they arrived,” Davis said.

The Davises never harbored bitterness, Liz Davis said. “Through Doug’s death, the Lord used them to give inspiration to others who were grieving.”

Guy Nelle has been at Maplewood for three years this month, where she helps everyone remember, “Everyday is a good day if you put it in the hands of the Lord.”

By LAURA BROOKHART / Community Columnist The New Year has brought to Helena’s Gwen Brown a new opportunity that she... read more