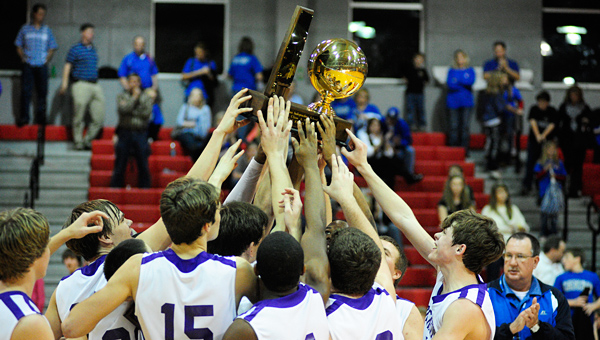 The Cornerstone Chargers lift their trophy following their victory in the AISA championship game on Feb. 16 in Montgomery. (Reporter Photo/Jon Goering)

MONTGOMERY — Cornerstone Christian School senior Kendall Moore may own several boys’ basketball school records, but they all paled in comparison to what he accomplished in his final game wearing a purple and white uniform.

Individual marks mean little to Moore, the school’s all-time leading scorer who had been searching for a more elusive prize ever since he picked up a basketball early in his childhood.

Moore and his teammates rushed to midcourt to seize the championship trophy he’d been waiting for following the Chargers’ 46-38 win over Crenshaw Christian Academy in the Alabama Independent Schools Association Class 1A championship game Feb. 16 at Catherine Dixon Roland Arena on the Huntingdon College campus in Montgomery.

“This is far and above anything that has ever happened to me in basketball,” Moore said. “Since I was a little kid, this is what I’ve been working for — a state championship.”

The championship was the school’s second AISA Class 1A title, which came seven years after the Chargers claimed their first championship in school history on the same court.

Moore led the Chargers (21-7) with 17 points in the championship game, which earned him the AISA Class 1A state tournament most valuable player honor.

“To me, that’s the most special thing of all,” Smith said. “He deserves this championship. He was a champion whether we won tonight or not.”