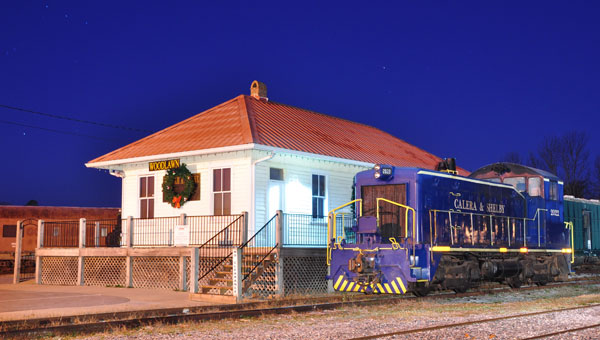 In the blue hour and with the Orion looming overhead, Frank Orona captured the Calera and Shelby 2022 resting next to the Boone Library located at the Heart of Dixie Railroad Museum. (Contributed)

While some boys dressed as firemen, policemen and doctors on Career Day at Calera Elementary, Frank Orona dressed in train engineer overalls. Orona, a 2003 CHS alumnus, developed a passion for trains growing up in Calera.

“At one time a road crossed over the railroad where Highway 31 becomes four lanes,” Orona said. “My mom crossed those tracks taking my sisters and me to school. I saw trains every day and was fascinated with the colors of the freight cars and logos.”

His mother, Maggie, stopped one morning to ask if her son could look inside the cab. Sitting in the engineer’s lap and blowing the horn left an imprint in his memory. While working for the railroad was Orona’s dream, trainmen discouraged him to choose that career.

“They would say to me, ‘This isn’t the job for someone who wants to have a family, the hours are very demanding. You’re on call 24/7 and never home on time, it’s much like a trucker’s life.’”

His interest also stems from family history. At the turn of the 20th century, the Orona family migrated from Chihuahua, Mexico to Pueblo, Colorado. Orona’s great-grandfather was employed with Chicago Freight Car company and both his grandfathers made rail at the Colorado Fuel and Iron Mill.

Orona’s father, Rudy, worked for Abex making train wheels. The family legacy impacts his work, distinguishing his photos from others. Freight cars, logos, railroad equipment and switching stations are captured in his photos.

He takes advantage of the natural wonders of the earth and sky in the setting.

In 2010 Orona graduated from Auburn with a double major in materials and mechanical engineering.

It was at Auburn he found friends with a kindred interest in railroad. In 2007 he purchased his first digital camera and his friends taught him the art of photography.

Orona presently lives in Valley, and works in quality control at Kia Motors’ U.S. Assembly Plant in West Point, Ga. In pursuing his photography interest, he turned to Railpictures.net.

To view his photos, select search by photographer. Contact him at oronafs@gmail.com for purchases.

His pictures have been published by Trains Magazines, and recently he was contacted by the Brotherhood of Locomotive Engineers and Trainmen publication.

Alabama Goods in Homewood will soon offer his photographs.

Orona’s greatest desire is the culmination of his family legacy.

“It excites me to think at some point there is a freight car riding on a wheel cast in my hometown that may be rolling along rail rolled and straightened by my grandfathers,” he said.