Bring your treasures to the Antique and Appraisers Market 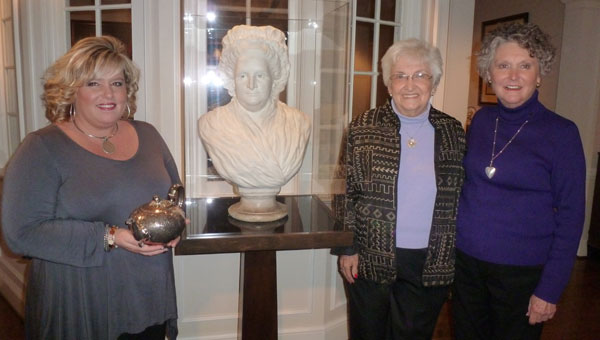 Have you ever wondered what Great Grandmother Eliza’s teapot is worth that has been in your family forever? The time to find out is now!

The first Central Alabama Antique and Appraiser Market benefitting the Columbiana Library will be March 3 from 9 a.m. to 3 p.m. at Dr. Stancil and Ann Handley’s fabulous barn, 245 Old Highway 25 West, Columbiana. Tickets are $5 and items to be appraised are $5 each (maximum of three) with more than 20 antique vendors and appraisers, great food and Sexy Tractor Band entertaining.

More than 30 years ago Charlotte “Chotsie” Smith Weaver brought her Great-Great-Great-Grandmother Eliza’s silver teapot to a Vignette Club meeting in Columbiana. The Vignettes were having a program with antique expert George Burton as the appraiser. Members brought items to learn their value just like the Antique Market coming up.

“I remember there was a long table where we put our items on,” said Vignette Donna Morris. “Mr. Burton walked by each item and told about it. Suddenly, he stopped and picked up a silver teapot. He examined it very carefully and then looked up. I remember his exact words to this day. ‘Who in this room is a direct descendant of Martha Washington?’”

Weaver, who lived in Chelsea, had inherited the Washington family’s heirlooms.

Burton encouraged Weaver to consider having the collection preserved in a museum. He introduced her to the late Karl Harrison, who was president of the First National Bank of Shelby County, who purchased the collection. A chance encounter between an appraiser and an owner ultimately led to the birth of the Karl C. Harrison Museum of George Washington, located at the Columbiana Public Library. The museum contains the largest collection of Washington memorabilia outside of Mt. Vernon.

Search in your attic, look around your home and bring your treasure to the Antique Market on March 3. Who knows what you might find, maybe a treasure of Thomas Jefferson or Abraham Lincoln!

Antique “Roadshow” is at Handley’s barn