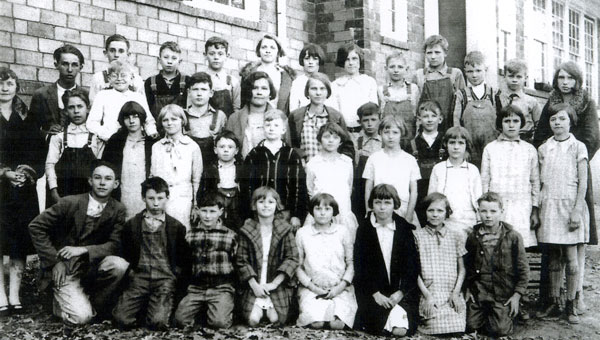 Shannon Cowart, a fourth generation Helena resident, recently shared some of her memories of growing up in Helena during the 1970s.

Cowart, who lives in her grandparents’ home on Roy Drive — the same home in which her mother, Elsie Jenkins Cowart, was born — once claimed Joe Tucker Park as her backyard playground.

Cowart remembers playing here at age four and riding the tire swing with her special playmate, a boy named Bruiser, known for “always getting into things.”

Nicknamed “Red” during her youth, she recalls, “Bruiser once told me, ‘Your hair is like a carrot,’ but seeing the expression on my face, added, ‘But I really like carrots.’ ”

One day Bruiser did not show up at the playground. He had drowned the previous evening in Joe Tucker Lake, which was just being filled.

Adults would only say, “‘He went to be with Jesus.’ I just couldn’t understand why he hadn’t come to tell me bye,” Cowart recalls.

She still has a very clear memory of her next time alone on the tire swing, looking up into the sky, missing him and realizing the finality of the loss of her friend.

Diagnosed with epilepsy at age three, she was occasionally seen having seizures by the other children, which provoked some teasing and thoughtless remarks.

“I would talk to my horses about the pain I felt. I fought the disease in my own way, acknowledging my mother’s reminders to not let anyone take away my joy.

“I believe that these experiences ultimately led to the deep compassion and connection I have with children today,” she said.

Cowart loved riding her black horse, Midnight, to Joe Tucker Park where at that time there was one ball field, one log cabin, one tennis court, and the pavilion dedicated to the Rev. Fred Holmes.

In the overflow pond by the northeast culvert, she once unexpectedly caught a sizeable catfish on her fishing pole and, not knowing what to do next, luckily was noticed by librarian Jane Holmes, who brought a newspaper to hold and unhook the fish before throwing it back into the lake.

She recalls that years later it was in the log cabin (now marked no trespassing) that she experienced her first kiss!

Cowart was a regular at Mullins Grocery in Old Town, where she would select candy and charge it to the family tab.

Many years later, in a conversation with her mother, she mentioned how much she had cost the family in candy purchases. She then learned that the Mullinses had never billed her parents for a dime of her candy.

There are certain hearts and the best ones have love

Jan Hughey’s kindergarten class of Love Bugs had nothing but sweet thoughts to share. Giving other people love and appreciating... read more