Performing is in Bunton’s blood 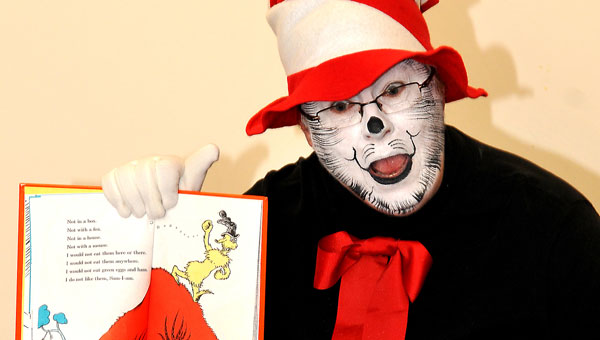 Jennie Bunton as The Cat in the Hat. (Contributed)

When Jennie Bunton appears at the Helena library, it means a flock of youngsters will soon gather to enjoy storytime.

She may arrive costumed as Mother Goose or The Cat In The Hat but one will observe that she is having just as much fun as the kids, if not more.

She loves to entertain, saying, “I think it’s in my blood. My uncle, Al Fennell, along with his brothers and sisters, were in vaudeville in the 1930s. He performed in the style of Al Jolson in black-face and sang songs like ‘Mammy’ and ‘Sewanee River’.”

Bunton, who grew up in Tarrant, was singing in rock bands by 15 and performed over the next 15 years at parties doing Linda Ronstadt and Bonnie Raitt covers and other ’60s, ’70s and ’80s songs.

She worked a “normal job” in cash receivables at Integrated Medical Systems with side gigs doing singing telegrams with Surprise Express for several years, then stepped into the role of clown, when the regular clown of the group moved away.

“My clown has the personality of a 6-year-old,” Bunton explains. “And I am what is called an Auguste clown, which means ‘Silly Boy.’ I play the prankster whose jokes backfire on him.

“In clown school we learned about the different types — classic white face, tramp/hobo (think Red Skelton and Emmett Kelly) and Auguste seemed to be the natural fit for my personality.”

“When I put on my chartreuse wig, I seemed to glow, thus I became Gloie the Clown.”

Bunton’s wig has now changed to bright red. She is a balloon artist, a very talented face painter and calls her business Gloie’s Fun Parties and Faces.

She taught skits, make-up and wardrobe at Magic City Clown School in 1998. At the 2004 World Clown Association convention, her group skit won the silver medal for their performance of ‘Horse Tales’”.

Bunton is a volunteer clown at Children’s Hospital, where she visits monthly.

She is currently the storyteller in Alabaster and Columbiana libraries, plus various day care facilities.

And Bunton says she has always been encouraging of her son Jacob’s musical interests. Jacob writes, plays guitar, violin and keyboard for the club band Lynam, formed in 2001, which tours and has played on rock cruises ShipRocked and The Motley Cruise.

In this photograph taken at Helena School in 1928 are Cowart’s grandmother, Linda Mae Bates, and her uncle James Bates.... read more