Dozens turn out for SCAC exhibit 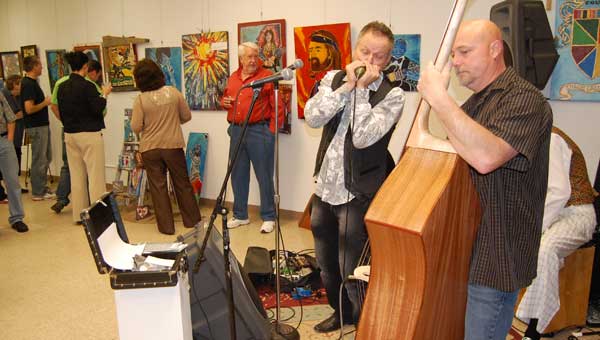 COLUMBIANA–Dozens of people packed into the Shelby County Arts Council in Columbiana March 9 for the opening reception of the Regional Folk Art Exhibit.

Jones, the featured artist, also was scheduled to participate in a student outreach program sponsored by the SCAC at the Shelby County Detention Center. Jones, a self-taught artist, said he felt a personal connection to the program.

An alcoholic, Jones quit drinking and managed to turn his life around after he was released from prison.

“Seven years later, I got hired as a federal agent in the Everglades,” he said to laughs and applause in the crowd.

SCAC Executive Director Terri Sullivan said she was pleased with the turnout and credited Susan Dennis Gordon, director of arts and education, with the event.

“Susan had the great idea,” she said.

The SCAC is a non-profit organization dedicated to supporting arts and culture in Shelby County.

The Regional Folk Art Exhibit will be on display March 8-April 26 at the SCAC, 104 Mildred Street, Columbiana. For more information, visit Shelbycountyartscouncil.com.

The American Red Cross Alabama and Central Gulf Coast Blood Services Region has announced that it will move its regional... read more