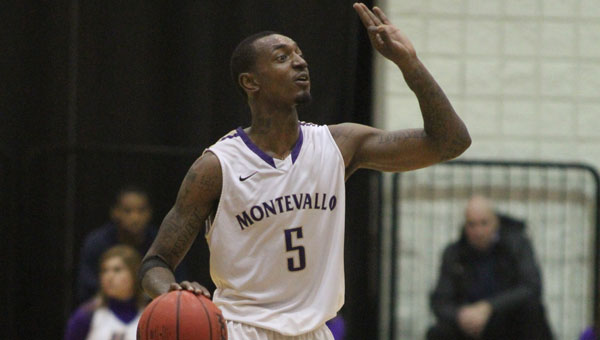 University of Montevallo senior D.J. Rivera has his eyes set on the school record book after leading the Falcons to a 96-87 win over Barton College in their opening game of the NCAA Division II tournament, the Southeast Region tournament quarterfinals March 10 at Bank Trust Arena.

Rivera led the top-seeded Falcons with 33 points in the win over the Bulldogs, the 2007 NCAA Division II national champions, leaving him 31 points shy of the school record for points in a single season.

“It was a rough one today,” Rivera said. “I’m just glad we pulled it out.”

Rivera will try to become the school’s single-season scoring leader in the Southeast Region tournament semifinals March 11 against No. 4 seed Lincoln Memorial in the quarterfinals. Tip-off is set for 7:30 p.m., approximately 30 minutes after the conclusion of the first semifinal between No. 3 seed Anderson University and No. 7 seed Wingate University.

Rivera, who knocked down 11-of-17 field goals, including 3-of-7 attempts from beyond the arc, made only 8-of-18 free throws. Rivera also finished with seven rebounds and three steals.

Travis DeShazior added four points, while Ryan May finished with two points in the victory.