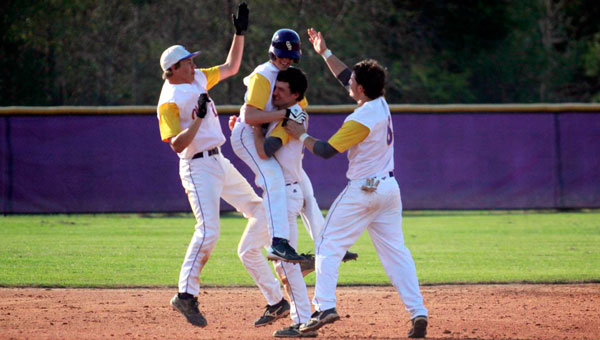 Cornerstone Christian School seniors Chase Payne, Austin Davis and Auston Wingard celebrate with Hagan Joiner after he hit a two-run double to drive in the game-winning run March 13 in the bottom of the seventh inning in the Chargers' 5-4 win over Prattville Christian. (Contributed/Cindy Wingard)

After trailing 4-2 going into bottom of seventh inning, Auston Wingard led off with a walk before Dalton Lodge flied out to center. Tim Warren doubled before Sterling Reither grounded out to short, scoring Wingard.

Clayton Halbert then walked and stole second base before Hagan Joiner doubled after facing a full count and two outs, scoring both runners for the win.

Austin Davis pitched six innings, giving up only four hits. Joiner entered the game in the top of the seventh inning to get the win.